Gilpin scores twice, assists on another in 4-0 triumph 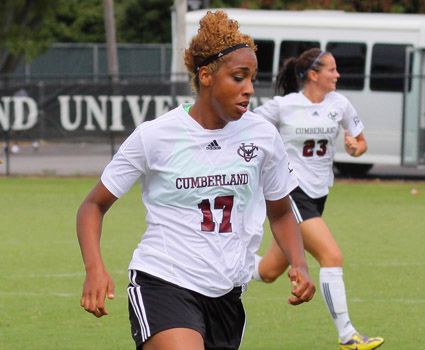 LEBANON, Tenn. – Junior Shauna Gilpin scored a pair of goals and assisted on another, as eighth-ranked Cumberland netted a pair of goals in both halves in a 4-0 victory over the University of Mobile on Saturday night in Mobile, Ala.

Gilpin put the Bulldogs (2-0-1) ahead with an unassisted goal in the 20th minute on a floater over UM keeper Rebecca Wynne’s head after a giveaway at the top of the box by the Rams. CU maintained the 1-0 edge until freshman Emily Shires took a feed from Gilpin in the 35th minute and finished low and to the far post for a 2-0 CU advantage at the break.

Sophomore Olivia Chu and junior Taylor Nay hooked up just after intermission for Cumberland, with Chu firing into an open net after moving away from Wynne near the goal. Gilpin picked up a loose ball off a corner kick in the 61st minute, putting it away for her third goal of the year and 35th and 36th of her career.

The Bulldogs held a 22-15 advantage in shots in the match, forcing Wynne to make six saves. CU keeper Lindsay Kitson posted a pair of saves in the victory.