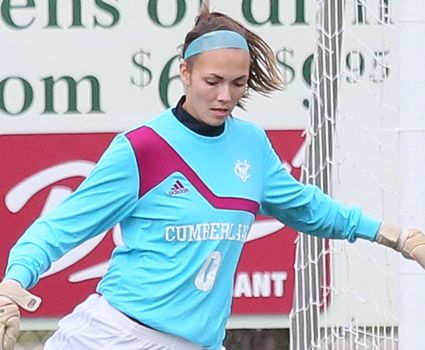 Lindsay Kitson (above) and Shauna Gilpin were named the Mid-South Conference Offensive and Defensive Players of the Week. (Credit Steve Wampler)
Related Links

LEBANON, Tenn. – Cumberland seniors Shauna Gilpin and Lindsay Kitson were voted the Mid-South Conference Women’s Soccer Offensive and Defensive Players of the Week on Monday for their performances in outings versus No. 9 William Carey and the University of Mobile.

Kitson did not allow a goal (only score for William Carey was an own goal) and also saved a penalty kick in a pair of matches. She saved a PK less than five minutes into the William Carey match and made six saves against the No. 9 Crusaders in the 1-1 draw.

The Edmonton, Alberta, native posted her 25th career shutout in two-plus seasons between the pipes for CU against Mobile, registering two saves and facing 15 total shots. The Bulldogs allowed a goal in the 12th minute in the season opener to Tennessee Wesleyan but have given up just the own goal since then, a span of 279:36.

Gilpin scored the first and last goals and assisted on another in CU's 4-1 victory at Mobile in the second of two matches for the week. She put the Bulldogs ahead with an unassisted goal in the 20th minute on a floater over UM keeper Rebecca Wynne’s head after a giveaway at the top of the box by the Rams.

The St. John’s, Newfoundland, native assisted on Emily Shires' goal in the 35th minute and then scored unassisted in the 61st minute, picking up a loose ball off a corner kick in the 61st minute. She has three goals and one assist in three matches so far this year for CU.

The eighth-ranked Bulldogs open Mid-South Conference play Thursday at Campbellsville University before heading to No. 17 Brenau University for a match Saturday night.