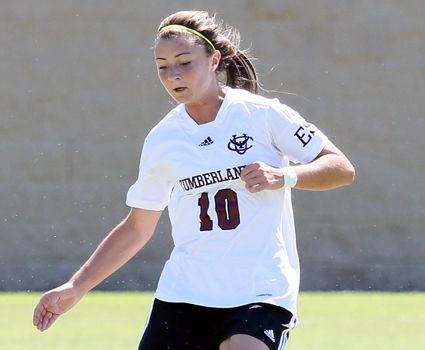 LEBANON, Tenn. – Kaitlin Phillips scored in the 14th minute and Shauna Gilpin posted a goal and an assist, as eighth-ranked Cumberland recorded its third victory in five days with a 2-0 win Monday night over Union University in Jackson, Tenn.

The Bulldogs moved to 5-0-1 on the season with five of the matches away from home over the last 11 days. CU has registered road victories over the University of Mobile, Campbellsville University, 17th-ranked Brenau University and Union and a draw versus No. 9 William Carey since September 5.

Phillips netted her second goal in three outings with a shot low and left from inside the six-yard box on an assist from Gilpin in the 14th minute. Gilpin put in an Emily Shires rebound in the 21st minute for her sixth goal of the year.

Cumberland posted a 17-10 advantage in shots and forced Union keeper Kristen Francis into five saves, while CU goalie Lindsay Kitson collected two saves in her third shutout of the season, all in the last four matches.

The Bulldogs face seventh-ranked Davenport University on Friday in Columbia, Ky. The Panthers won 3-2 in overtime over Cumberland in the Round of 16 in last year’s NAIA National Championships.