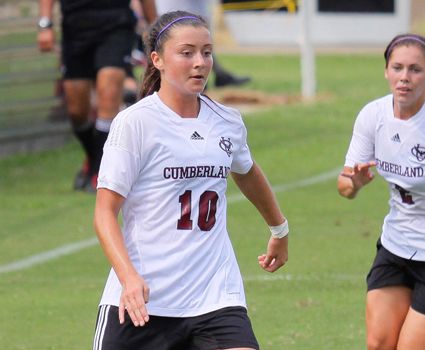 LEBANON, Tenn. – Kaitlin Phillips and Emily Shires both scored early in the second half and Taylor Nay added a pair of goals later in the period, as eighth-ranked Cumberland answered its sternest test to date with a 4-0 victory over No. 7 Davenport University on Friday night at the Lindsey Wilson Stanno Classic in Columbia, Ky.

The Bulldogs (6-0-1) remained unbeaten this season and now have a pair of victories and a draw against ranked teams as well as a win over another team receiving votes in the Preseason Coaches’ Top 25. The first regular season poll will be released this Tuesday.

Phillips netted her third goal in four matches, this one unassisted in the 55th minute after the two teams combined for just eight shots in a scoreless opening half. The senior dribbled from midfield and lofted her shot off the outstretched arms of Panthers keeper Tara Gessler.

Shires put the Bulldogs ahead, 2-0, when Davenport (6-1-0) failed to clear a ball in the box and the freshman fired into an open net in the 63rd minute.

Nay found the back of the net in the 73rd minute, as the Bulldogs poured on the offense throughout the period. She headed in a Phillips free kick before scoring unassisted off her own free kick in the 80th minute.

Cumberland has now scored 14 of its 18 goals this season in the second half. Lindsay Kitson recorded four saves in net and posted her fourth shutout of the year in the match.