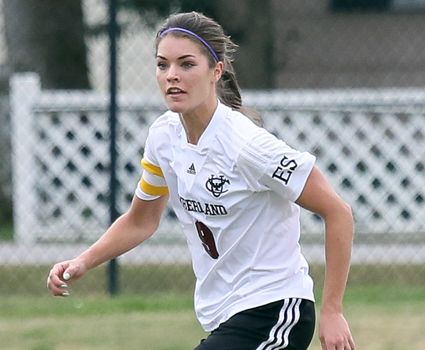 LEBANON, Tenn. – Reneé LaRose’s header 55 seconds into extra time provided the game-winner, as eighth-ranked Cumberland came from behind for a 2-1 victory over No. 13 Martin Methodist in women’s soccer action Tuesday at Lindsey Donnell Stadium-Kirk Field.

LaRose missed several opportunities for headers on corner kicks during regulation, especially in the second half, but the senior crashed the top of the six-yard box on a corner by Kaitlin Phillips in the first minute of overtime. The header was near post into the side net, sending the Bulldogs (8-0-1) into a celebration for the hard-fought victory.

Cumberland created a couple of good scoring chances in the first half, with a long clearance by Lindsay Kitson run down at the top of the box by Shauna Gilpin, but her left-footed shot scooted right of the net. A few minutes later Olivia Chu had a similar chance, but her shot also sailed right of the goal.

Martin Methodist’s Anna Becerra found the back of the net in the 22nd minute after a scramble in front on a free kick delivered into the box by Caroline Ladaga da Silva, but the RedHawks were called offsides on the play, nullifying the goal.

The Bulldogs controlled play much better in the second half after an uneven opening period, with Chu and Emily Shires continually threatening on the outside, but the RedHawks struck first. Ladaga da Silva’s cross from near the sideline to the far post was headed in by Fabiola Sanchez in the 57th minute, but that seemed to wakeup Cumberland.

Gilpin got the equalizer, also a header to the front post into the side net, after a nice cross from Shires in the 65th minute. The duo nearly hooked up for another goal at least twice more on the same sequence in the final 25 minutes, but Gilpin’s header was saved by MMC’s Jhani Williams and her half-volley was miss-hit and went straight to the keeper.

Cumberland had six corner kicks in the second half and nine in the match, with LaRose heading at least three of those corners either over the net and just to the right. Another scramble in front led to one shot being cleared off the line by a RedHawks defender.

Cumberland plays at home twice more in the next week, taking on St. Catharine College on Saturday at Noon and the University of the Cumberlands on October 1 at 1 p.m.