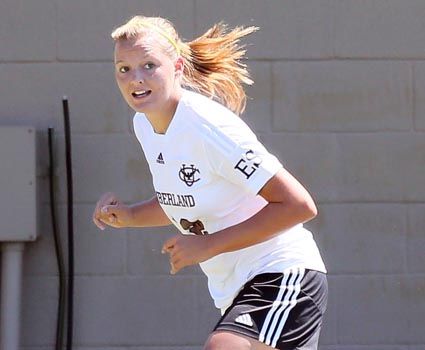 The Bulldogs (9-0-1, 3-0-0) scored five times in the first 18 minutes and netted the final goal with nearly 20 minutes remaining in the match against the Patriots (2-5-1, 1-2-0). Cumberland plays at home again Wednesday at 1 p.m. against the University of the Cumberlands before hitting the road for matches at the University of Pikeville and No. 6 Lindsey Wilson.

Taylor Nay got the scoring started, putting in a deflection in the fifth minute, and Dayle Weslosky booted in a corner kick in the 12th minute for the Bulldogs. Gilpin posted her 10th goal of the year just over two minutes later and Phillips’ shot from 15 yards out on an assist from Chu less than a minute later made it 4-0 for the Bulldogs.

Emily Shires scored near the top of the six-yard box on an assist from Nay in the 18th minute and Lyons netted her first goal unassisted just before the half.

Chu and Gilpin hooked up just after intermission, with Chu collecting her second goal of the year, and the two players switched roles 30 seconds later for an 8-0 advantage. Phillips assisted on Lyons’ second goal of the match in the 67th minute and Sammy Groves registered the final score for the Bulldogs in the 71st minute on an assist by Maddie Barbier.

Cumberland outshot the Patriots, 38-2, with CU keeper Lindsay Kitson making one save. SCC’s Emily Belt and Jerrica Kidd combined for 17 saves, including 11 by Kidd in the second half.