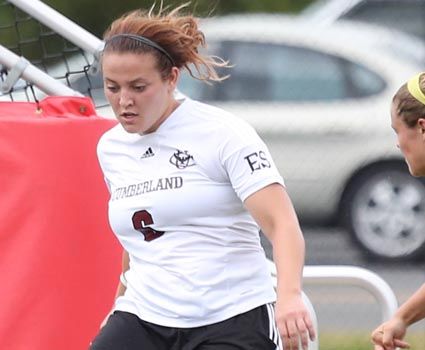 Gilpin got the Bulldogs on the scoreboard in the seventh minute, taking a pass from Shires and finishing past UC keeper Autumn Williams. She scored again just over two minutes later, winning a ball in the middle before beating her defender and then Williams for her 13th goal of the year.

Dayle Weslosky scored on a Phillips corner kick at the 10-minute mark of the opening half, the second goal of the year for the sophomore. Williams made a kick-save several minutes later on a shot by Gilpin after nice passes from Shires and Phillips.

Weslosky nearly scored again on the ensuing corner kick, with Williams saving one point-blank shot and the second attempt hitting the left post and bouncing all the way across the goal before being cleared by the Patriots.

Gilpin netted her third goal of the match in the 24th minute, taking a pass from Phillips near the end line and firing past Williams.

Keele collected her second goal of the season in the 28th minute on assists from Kiley Sanson and Nay and the Samantha Groves and Nay had the assists on Keele’s second goal of the match just over three minutes later for a 6-0 CU advantage.

Groves was on the receiving end late in the first half on a nice through-ball from Sanson, with Groves chipping past a charging Williams in the 43rd minute for a 7-0 lead at intermission.

Phillips just got her foot on a cross from Shires in the 50th minute for her seventh goal of the year and Nay drilled a 30-yard shot over a helpless Williams in the 55th minute, her eighth of the season. Nay and Phillips had quick touches to a streaking Gilpin four minutes later for her fourth goal of the match and a 10-0 advantage.

Keele netted the final goal on a cross from Olivia Chu, with a 50-50 ball deflecting hard off the shin of Keele and into the goal from just past the penalty spot in the 73rd minute.

Cumberland heads to the University of Pikeville for an 11 a.m. Central Time match Saturday before taking on sixth-ranked Lindsey Wilson on the road next Tuesday.