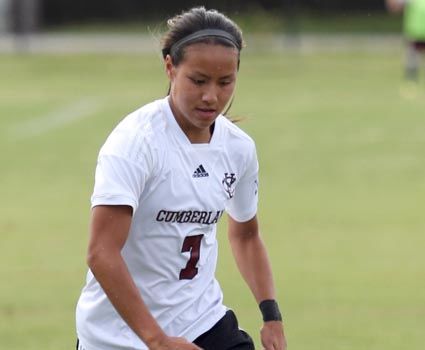 LEBANON, Tenn. – Olivia Chu scored twice and assisted on another goal and Kaitlin Phillips handed out a pair of assists, as No. 1 Cumberland came out slugging but scored four times in the second half in a 4-0 victory over Georgetown College on Friday at Lindsey Donnell Stadium-Kirk Field.

The Bulldogs (12-0-1, 6-0-0 Mid-South) played their first match as the No. 1 team in the nation and for the first time since October 4 at the University of Pikeville. The club’s only scheduled match over the last 13 days was rained out and will be made-up Oct. 27 versus Lindsey Wilson.

Cumberland was unable to breakdown the defensive barrier by the Tigers (6-8-0, 2-3-0) in the first half, with Georgetown putting as many as 10 players behind the ball and that many in the box at times.

Halftime adjustments helped CU get on the scoreboard just three minutes into the second period, with Phillips feeding Chu down the right side. Chu ran down the pass near the end line, crossing to Emily Shires in front of the net for an easy chip-in in the 48th minute.

Chu was rewarded for her hard work in the second half in the 66th minute, with Taylor Nay playing a short pass to the sophomore near the right post. She shielded her defender, made the turn and beat Georgetown keeper Brittany Moshos with a hard shot just inside the front post for a 2-0 advantage.

Just over four minutes later Shauna Gilpin’s pass to Chu led to a similar shot, again sneaking past the keeper at the front post. Senior Beth Morgan tallied the final goal for the Bulldogs on Senior Day, with Phillips assisting on a shot that deflected off Moshos’ hands, hit the far post and bounced in with just over a minute to play.

Cumberland outshot the Tigers, 28-2, including 14-0 in the first half. Moshos finished with six saves for the Tigers.

The Bulldogs host Asbury University on Oct. 23 at 2 p.m. and finish the home schedule Oct. 27 at 2 p.m. against Lindsey Wilson.