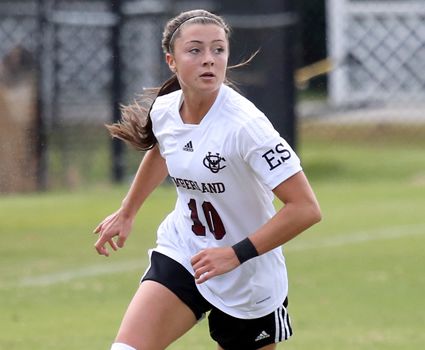 The Bulldogs remained undefeated at 12-0-1 with last Friday’s 4-0 victory over Georgetown College, the first match for the club in almost two weeks after a rainout on October 7. CU has outscored its opponents this season, 67-5, including 50-2 in Mid-South Conference action

Cumberland’s only blemish this season was a 1-1 draw versus William Carey on September 5, but the club has won 11 straight matches since then.

CU faces Asbury University at home Thursday at 2 p.m. and finishes the home schedule on Monday against seventh-ranked Lindsey Wilson in a makeup of the Oct. 7 rainout. The Bulldogs still must travel to No. 6 Northwestern Ohio on November 3 before taking part in the Mid-South Conference Championships.

Cumberland was ranked No. 1 in the initial MRPI released three weeks ago but dropped to third in the second edition of the MRPI on Wednesday. William Carey is No. 1 with Embry-Riddle second.

The MRPI consists of the team’s modified winning percentage, their opponents’ winning percentage and the cumulative ratings points from the NAIA Women’s Soccer Coaches’ Top 25 Poll. Each of the three values has a weighted percentage calculated in the MRPI. The MRPI modifies the value of home/away/neutral results and adds more value for games against opponents ranked in their respective national poll.

The MRPI, which began in 2010, selects the at-large qualifying teams and seeds the 32-team national championship field. The third and final MRPI will be announced on November 16.