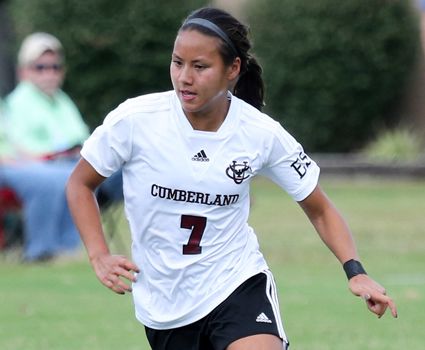 LEBANON, Tenn. – Lyana Perez scored twice on rebounds in a span of 32 seconds, erasing an early goal by No. 1 Cumberland, and seventh-ranked Lindsey Wilson came out of their season-long scoring doldrums with a 6-1 victory over the Bulldogs here Monday at Lindsey Donnell Stadium-Kirk Field.

With the win, Lindsey Wilson (9-3-3, 6-0-1 Mid-South) claims the Mid-South Conference regular season championship and the No. 1 seed in the conference tournament that begins in two weekends at home sites. The Bulldogs (13-1-1, 6-1-0) will be the No. 2 seed in the tourney and had their 11-match winning streak snapped in the loss, allowing more goals in Monday’s match than in the previous 14 outings combined this season.

Cumberland was unable to connect passes just about anywhere on the field during the match, as LWC applied pressure to the CU backline early and often and did not allow the Bulldogs to control play in the midfield as well.

Cumberland got off to a good start, with Emily Shires making a run down the leftside and her shot deflecting off the hands of LWC keeper Johanna Henrikson and then the crossbar, bouncing back into the field of play where Olivia Chu booted it into the open net for a 1-0 CU advantage just over nine minutes into the match.

But the Blue Raiders equalized at the 13-minute mark, with Elizabet Madjarac streaking down the middle into the box. Her shot was stopped by a hard-charging Lindsay Kitson, but the rebound bounced right onto the foot of Perez on the right, who fired into the open goal to even the score.

Just seconds later was almost the same exact play, but this time Amanda Kander was the Blue Raider heading down the middle for a pass and shot, which again deflected off Kitson and right to Perez again for her 11th goal of the season.

Madjarac was again the distributor in the 31st minute for Lindsey Wilson, playing a short pass to the penalty spot for Emilia Jonsson, who netted her first goal of the year for a 3-1 LWC lead, which the visitors took to intermission.

Cumberland gained more ball possession in the first 15 minutes of the second half but was still unable to connect passes in the attacking third. The longer the half went, the more dangerous Lindsey Wilson became and they finally broke through in the 66th minute on a sloppy goal allowed by the Bulldogs.

Perez’s throw-in went toward the top of the box and Madjarac beat Kitson to the ball, chipping it over the keeper and then easily into the net for a 4-1 edge. Kander had a beautiful finish in the 74th minute, heading in a long forward ball from Karin Bernset before Jonsson’s pass down the middle set-up Anna Vig’s sixth goal of the season in the 86th minute.

Cumberland must rebound quickly, as it travels to sixth-ranked Northwestern Ohio next Monday for the final regular season match of the year.