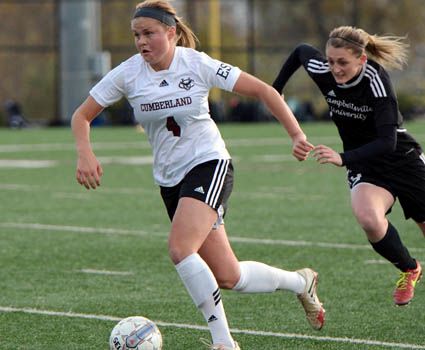 Taylor Nay scored the only goal of the match in the 34th minute in CU's 1-0 victory Thursday over Campbellsville. (Credit Richard RoBards)
Cumberland Univ. at Campbellsville Univ. | November 13, 2014

CAMPBELLSVILLE, Ky. – Taylor Nay scored in the 34th minute and ninth-ranked Cumberland dominated play after the first 15 minutes, taking a 1-0 victory over Campbellsville University here on a cold and windy Thursday in the semifinals of the Mid-South Conference Women’s Soccer Championships at Finley Stadium.

With the win, the Bulldogs (15-2-1) advance to the tournament finals for the third straight year where they will face familiar foe Lindsey Wilson, also for the third consecutive year, at 3 p.m. Eastern Time here in Campbellsville.

The Tigers controlled play for most of the first 15 minutes of the first half, with CU making Lindsay Kitson saving a long shot from Aris Kuntz and then making a diving save on Mhairi Fyfe’s attempt from a bad angle down the right side in the 14th minute. That would be the final shot of the match for the Tigers (13-7-0).

Slowly the Bulldogs turned the tide and the visitors played just about the entire final 30 minutes of the period on their offensive end.

While Cumberland had possession and created chances, many of its 12 shots in the first half went straight to Campbellsville keeper Amanda Howard and a chance down the leftside from Emily Shires sailed high. Olivia Chu, Shauna Gilpin and Shires each collected three shots in the period, but Howard made nine saves on the 12 attempts.

The Bulldogs finally broke through in the 34th minute, with Shires crossing to Nay near the penalty spot. The junior fought off a defender for the ball and poked it past a charging Howard for her 13th goal of the year.

CU nearly scored again in the final minute, with Dayle Weslosky playing a thru-ball to Chu, who was all alone, but her left-footed attempt was saved by a diving Howard, her best save of the half, keeping the score 1-0 at the break.

Neither team really threatened all that much in the second half until the final 15 minutes when Cumberland found holes in the Tigers defense as they pushed forward trying to the equalizer.

Howard made three more saves on Gilpin in the second half, the last one with just under three minutes to play that would have sealed the victory. Howard finished with 13 saves, keeping her team in the match.