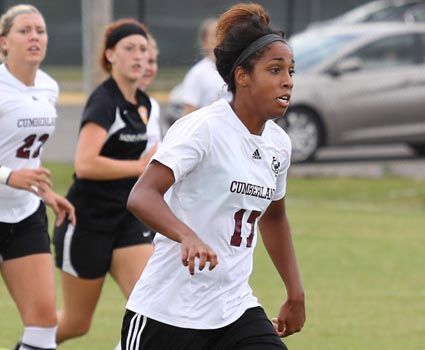 CAMPBELLSVILLE, Ky. – Shauna Gilpin netted her 18th goal of the season, but fourth-ranked Lindsey Wilson converted two penalty kicks and a free kick, scoring twice in the final 10 minutes to break open a close match and defeat No. 9 Cumberland, 5-1, in the finals of the Mid-South Conference Women’s Soccer Championships here Friday at Finley Stadium.

The Bulldogs trailed 2-1 at the half and 3-1 in the 80th minute before a shaky penalty was awarded and Carola Schneider scored her fourth goal of the year. Ayaki Shinada posted the final goal for the Blue Raiders (13-3-3) in the 84th minute after a giveaway inside the box. Her shot deflected off a Cumberland defender and into the net.

CU keeper Lindsay Kitson had two saves in the match, including one from point-blank range in the 74th minute that kept the score, 3-1.

Lindsey Wilson controlled play for the first 30 minutes of the opening half but mustered just two shots, though one Blue Raider goal was waved off after Lyana Perez was called offsides.

Play opened up in the final 15 minutes though, with LWC getting on the board first when Anna Vig was tackled in the box in the 32nd minute. Shinada converted the penalty kick, her eighth goal of the year.

Cumberland came right back, with Gilpin streaking down the leftside, but her outside-foot shot was saved nicely by Johanna Henriksson. The Bulldogs knotted the game in the 37th minute when Gilpin picked up a loose ball and her 15-yard shot to the far post bounced by Henriksson for the equalizer.

That lasted all of 57 seconds, with a strike Elizabet Madjarac drilling the crossbar and bouncing right to Vig, who headed it in for her 14th goal of the season and sixth in two matches over the last two days.

A foul on Vig just outside the box gave the Blue Raiders a free kick in the 59th minute and Bettina Brulhart made the free kick, around the wall and into the bottom left corner of the net for her 10th goal of the year.

Cumberland’s luck on the day showed late in the match when Gilpin’s point-blank shot off a corner kick nailed the crossbar and bounced outside the 18. Lindsey Wilson countered and eventually Shinada posted the final goal of the match.