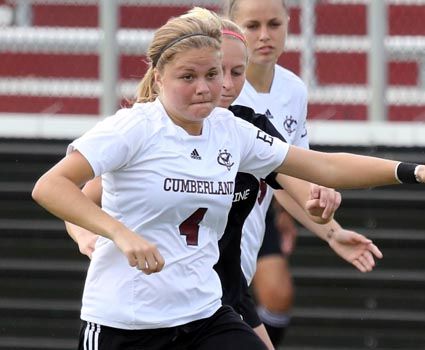 Taylor Nay scored in the 78th minute, providing the only goal in CU's victory over Concordia on Tuesday. (Credit Steve Wampler)

LEBANON, Tenn. – Taylor Nay’s strike from just outside the box found the back of the net in the 78th minute and Kaitlin Kisiloski assisted on the goal and then cleared a shot off the line in the closing minutes in 11th-ranked Cumberland’s 1-0 victory over No. 25 Concordia [CA] University in the NAIA Women’s Soccer Championships Tuesday in Orange Beach, Ala.

The Bulldogs (17-3-1) advance to the quarterfinals for the first time in program history at the 2014 NAIA Women’s Soccer National Championship, presented by the Sports Medicine Center at the Orthopaedic Group, P.C. CU will take on the winner of Lindsey Wilson and the University of Mobile on Wednesday at 6:30 p.m.

Kisiloski also helped Kitson after a corner kick with about five minutes to play, with the ball ricocheting toward the far post, but the sophomore was in the right spot, clearing it away before an Eagles player could reach the bouncing ball.

The Bulldogs controlled play for much of the second half but mostly in the midfield area, failing to keep possession or connect passes in the attacking third. But a nice buildup from the back led to the goal, with a ball played across the field from left to right, with Kaitlin Phillips leaving the long pass for Kisiloski, who was coming up the left sideline from her defending spot.

Kisiloski’s long ball down the left side was run down by Emily Shires, who held off a defender near the end line. She played the ball back to Kisiloski, who crossed to the middle and found Nay. The strike with the outside of Nay’s right foot sailed into the net low and right, past a diving Jazmin Alvarez, only the 16th goal allowed all season by the Eagles.

The Bulldogs hung on from there, unable to keep possession except for a short stretch, Concordia pushed forward for the equalizer. They earned the corner kick, but Kisiloski booted that away, and Kitson’s diving save to her right on a shot off the foot of Megan Daniels was the final chance to the Eagles.

Cumberland has played both potential opponents this season, posting a 4-0 victory over Mobile in early September and losing twice in a two-week stretch to Lindsey Wilson.