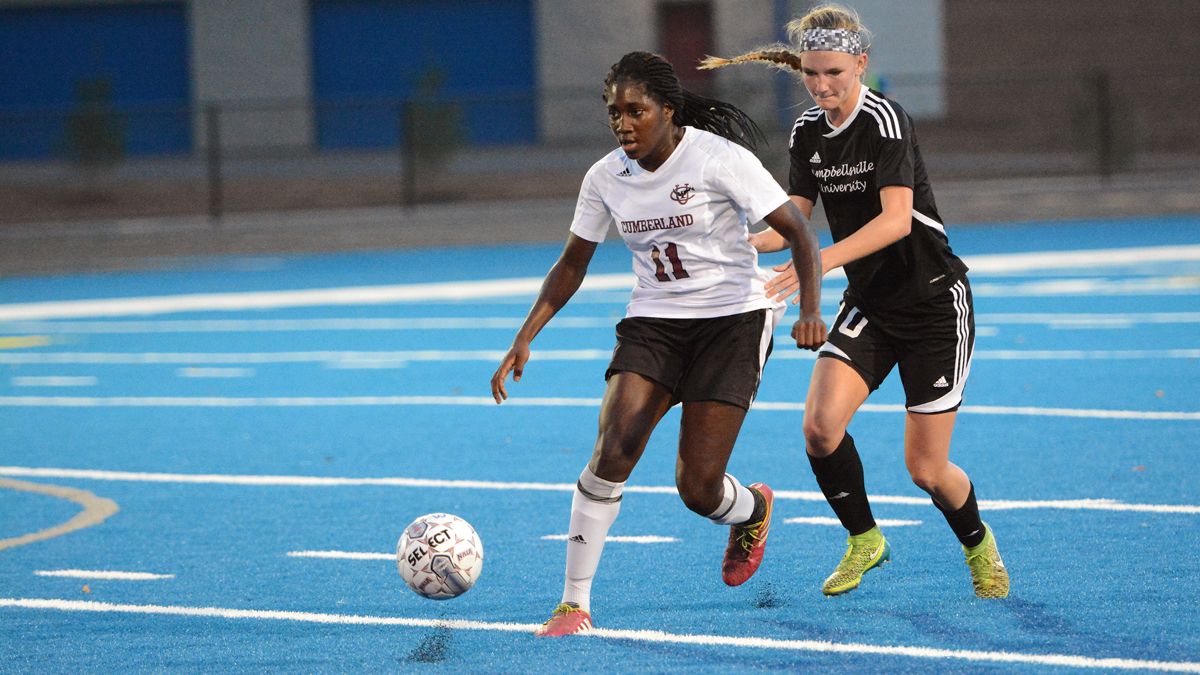 BOWLING GREEN, Ky. – Connie Awuku-Darkoh scored in the first half and Kaitlen Kisiloski netted a goal in the second period in 18th-ranked Cumberland’s 2-0 victory over Campbellsville University here Thursday evening in the quarterfinals of the Mid-South Conference Women’s Soccer Championships at Jim Ross Field.

The Phoenix (11-3-2) advances to next Thursday’s semifinals to take on 24th-ranked Georgetown College at 2:30 p.m.

Cumberland controlled the run of play for almost the entire match, creating numerous chances and peppering Campbellsville goalkeeper Amanda Howard with 24 shots in the match. Howard finished with a dozen saves, half of those of the diving variety, to keep the Tigers (10-7-1) in the contest.

She made saves against Savannah Moreland and Kisiloski in the first six minutes off corner kicks and Mariah Aplin’s half-volley was blocked and cleared away in the 22nd minute before the Phoenix broke through.

Aplin made a nice pass down the leftside to Awuku-Darkoh, who squared the ball into the side net at the far post in the 27th minute for a 1-0 advantage.

Maria Brenes’ shot from distance late in the half was knocked away by Howard and CU took a 1-0 edge to intermission.

Campbellsville’s best offensive chance of the match came early in the second half, but Ashley Kambeitz made a diving save off her line in the 52nd minute to keep her team in the lead. It was the only save of the match for the sophomore.

Cumberland continued attacking and Alys Maynord nearly netted the club’s second goal on a nice cross from Rebecca Holloway, but the shot just sailed over the crossbar.

Holloway’s corner kick was knocked back outside to the sophomore and she crossed again. Howard knocked the ball away but it fell right to the feet of Kisiloski, who scored into the empty net in the 60th minute.

The Phoenix took nine more shots in the period, including one from Moreland that hit the crossbar and Keera Sidney’s shot from distance late in the match.