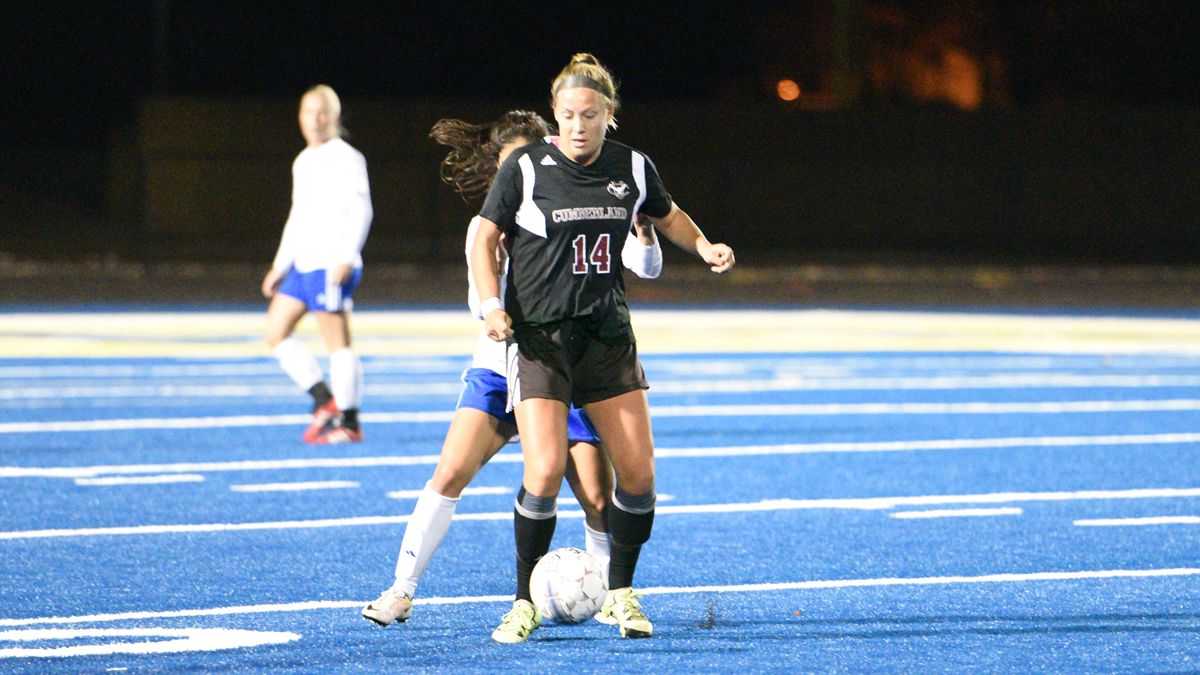 Emily Shires netted her 14th goal of the year for CU in a 2-1 loss Friday to Lindsey Wilson in the championship match of the Mid-South Conference Championships. (Credit Chris Wells)
#16 Cumberland Univ. at #4 Lindsey Wilson | November 11, 2016

BOWLING GREEN, Tenn. – Lyana Perez scored twice on rebounds in the final seven minutes and then cleared a shot off the goal line in the final seconds, giving fourth-ranked Lindsey Wilson a come-from-behind 2-1 victory over No. 16 Cumberland in the championship match of the Mid-South Conference Women’s Soccer Championships here Friday night at Jim Ross Field.

Emily Shires missed a scoring chance in the opening minute of the second half but made up for it in the 62nd minute, beating LWC goalkeeper Johanna Henriksson to a ball at the top of the 18, chipping it past the keeper to give the Phoenix (12-4-2) a 1-0 advantage.

That was too much time for the Blue Raiders (15-3-0), who continued to press and finally broke through with just over six minutes remaining. LWC had three shots, two on goal, just after the Cumberland score, but a fatigued backline for CU finally broke with 6:08 to play.

Yvonne Ploeg’s shot from the left nailed the crossbar and Perez blasted home the rebound in traffic to equalize for Lindsey Wilson. Just over two minutes later she found the back of the net again, this time on a rebound by Veronica Kurtz-Martinez that bounced right to the senior, who fired to the far post for her 12th goal of the year.

Cumberland got one final scoring chance in the closing seconds, with Connie Awuku-Darkoh’s shot through traffic getting past Henriksson but cleared away with 26 seconds remaining by Perez.

LWC held the ball in its offensive end for more than 85 percent of the first half but created few scoring chances. The Cumberland defense continually stepped in front of short connecting passes by the Blue Raiders, preventing shots and opportunities despite LWC controlling the run of play inside 40 yards for much of the period.

CU goalkeeper Ashley Kambeitz made a great sliding save off her line on the only good scoring chance of the half by either team, knocking away a left-footed shot by Ploeg just inside the 18 midway through the period.

Kambeitz finished with six saves in the loss, facing 14 LWC shots, 11 of those in the second half, while Henriksson posted a pair of saves.

Cumberland will learn its fate in the NAIA Championship Opening Round on Monday at 11 a.m. Central Time during the NAIA Women’s Soccer Selection Show, which may be viewed online at https://portal.stretchinternet.com/naia/portal.htm?eventId=326188&streamType=video.