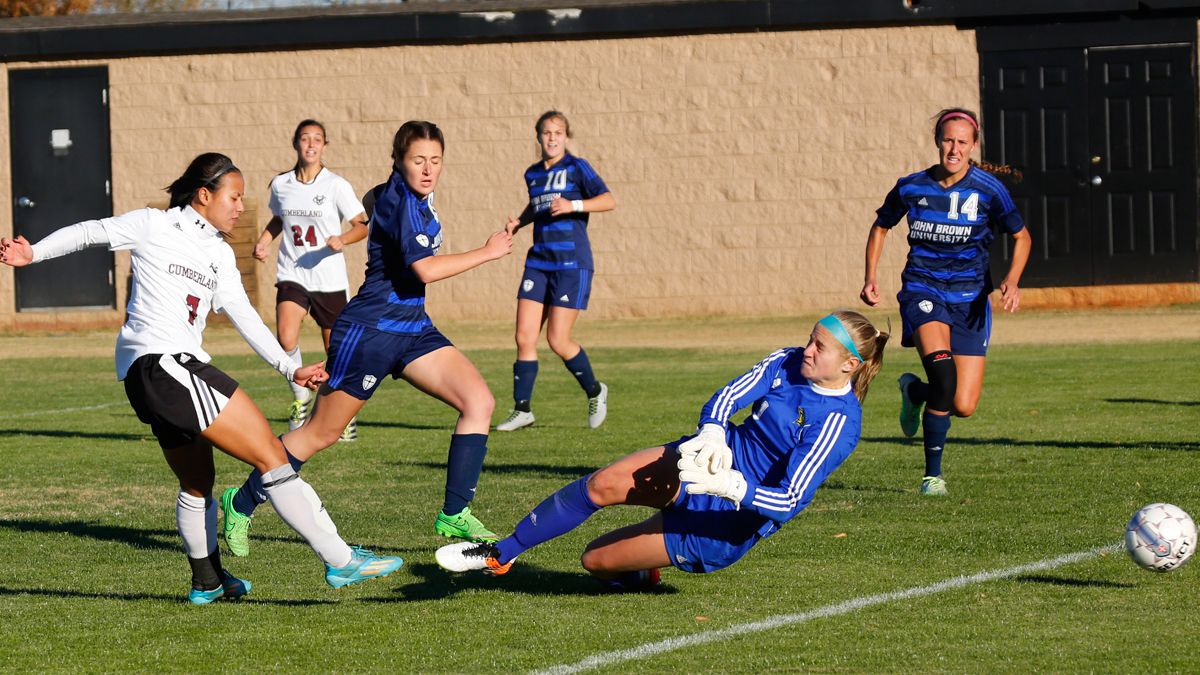 Olivia Chu scored with 1:01 remaining for the game-winner in CU's 2-1 victory Saturday over John Brown in the NAIA Opening Round. (Credit Bob Tamboli)
#14 John Brown Univ. at #16 Cumberland Univ. | November 19, 2016

LEBANON, Tenn. – Olivia Chu’s shot snuck just inside the near post with just 61 seconds remaining and 16th-ranked Cumberland eeked out a 2-1 victory over No. 14 John Brown in the NAIA Women’s Soccer Championship Opening Round here Saturday at Lindsey Donnell Stadium-Kirk Field.

The Phoenix advance to the NAIA Championship final site for the fourth time in five years in Orange Beach, Ala., and will face the winner of top-ranked Spring Arbor and Rochester College on Monday, November 28.

Cumberland (13-4-2) started the second half quickly, with Chu’s shot saved by JBU goalkeeper Kristen Morency in the opening minute of the period. The Golden Eagles (18-2-1) withstood the first 15 minutes, which was controlled by the home team.

John Brown dominated play for much of the final 30 minutes, continually attacking down the middle against the CU defense, but the Phoenix backline kept the ball outside the 18 for much of the half. JBU’s most dangerous chance came on a free kick by Aspen Robinson that was saved by Cumberland’s Ashley Kambeitz.

The Phoenix defense also did its job on corner kicks, clearing three balls off the line during the match – two in the first half by Kaitlen Kisiloski and one in the second from Savannah Moreland.

Cumberland regained some possession in the final minutes and Emily Shires, who netted the first goal for CU, had control down the leftside near the endline. She turned and crossed the Moreland nearly the penalty spot, who dropped it outside to Chu.

The senior took two dribbles and her shot just got under Morency and inside the far post, only her third goal of the year. She missed nine matches in September and drew her first start in three weeks in Saturday’s victory.

Cumberland had the first chances of the match with three corner kicks in a row in the opening five minutes, but Moreland got the only shot that was cleared out by the Golden Eagles.

John Brown took control of the possession after the first 15 minutes and found the back of the net in the 23rd minute, with Anne Metz crossing to Sara Lachance, whose first shot was blocked but she picked up the rebound and fired into basically an empty net from the bad angle to the right, her 10th goal of the year.

Cumberland played the first half against a stuff north wind but got a big equalizer in the 31st minute. Rebecca Holloway’s corner kick was cleared away to the top of the box by JBU, but Kisiloski settled the ball and slid it outside to Shires, who squared a shot into the upper 90, far post, a beautiful goal to even the match at one. It was the team-leading 15th goal of the year for Shires.