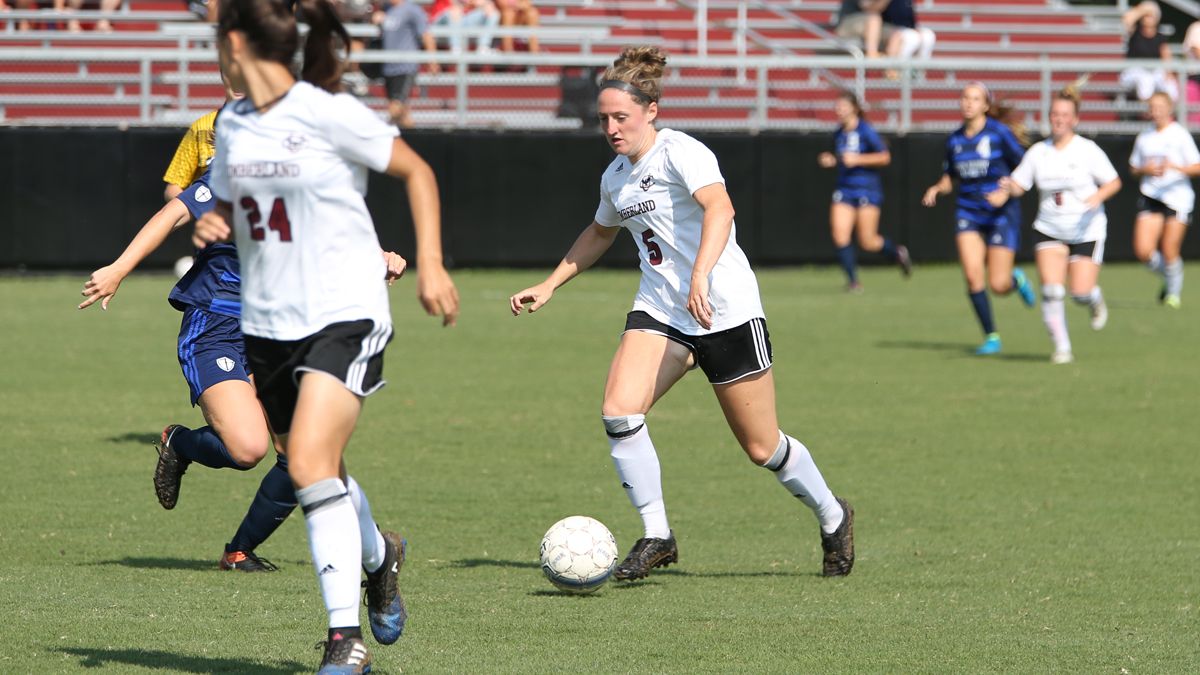 Rebecca Holloway posted her fourth goal of the year to get CU on the board in Tuesday's 3-2 double OT loss to Georgia Gwinnett. (Credit Bob Tamboli)
Georgia Gwinnett at #24 Cumberland Univ. | September 19, 2017

LEBANON, Tenn. – Rebecca Holloway netted her fourth goal of the year early in the second half and 24th-ranked Cumberland evened the match with an own goal, but Dominique Fletcher’s score in the 108th minute gave Georgia Gwinnett a 3-2 double overtime victory over the Phoenix in women’s soccer action here Tuesday at Lindsey Donnell Stadium-Kirk Field.

The match was delayed just over an hour before kickoff before of lightning in the area and then exactly an hour at halftime for the same thing. Neither team scored in the first period, but Holloway’s laser to the upper 90 from the top of the 18-yard box got the scoring started in the 59th minute. The ball was deflected away from goal after a corner kick by Savannah Moreland.

The Grizzlies (3-3-1) tied the match in the 71st minute when Fletcher’s cross from near the by-line was saved and deflected to Caitlin Berry, whose header was also saved. That left an open net for Amy Morland, who punched in her first goal of the year.

Morland struck again in the 71st minute, taking a pass down the right side and dribbling across the top of the 18, past three Cumberland defenders before firing into the upper 90 for a goal and a 2-1 GGC edge.

Holloway played a free kick from 35 yards down the middle wide left to Mariah Aplin in the 74th minute. Aplin’s cross went off the head of a Gwinnett defender and bounced across the goal line, evening the match at two.

The teams played even for more than 20 minutes before Holloway drew her second yellow midway through the second extra period. That left the Phoenix one player short and the Grizzlies took advantage.

The last goal was similar to the first, with Ana Gonalez’s shot from near the by-line saved, this one right to Lauren Moss, who also fired on net, but that was deflected toward the far post to a wide open Fletcher, who posted her second goal of the year for the walk-off win for Georgia Gwinnett.

Cumberland hosts Indiana Wesleyan on Friday at 1 p.m., the second of four straight home matches for the Phoenix.