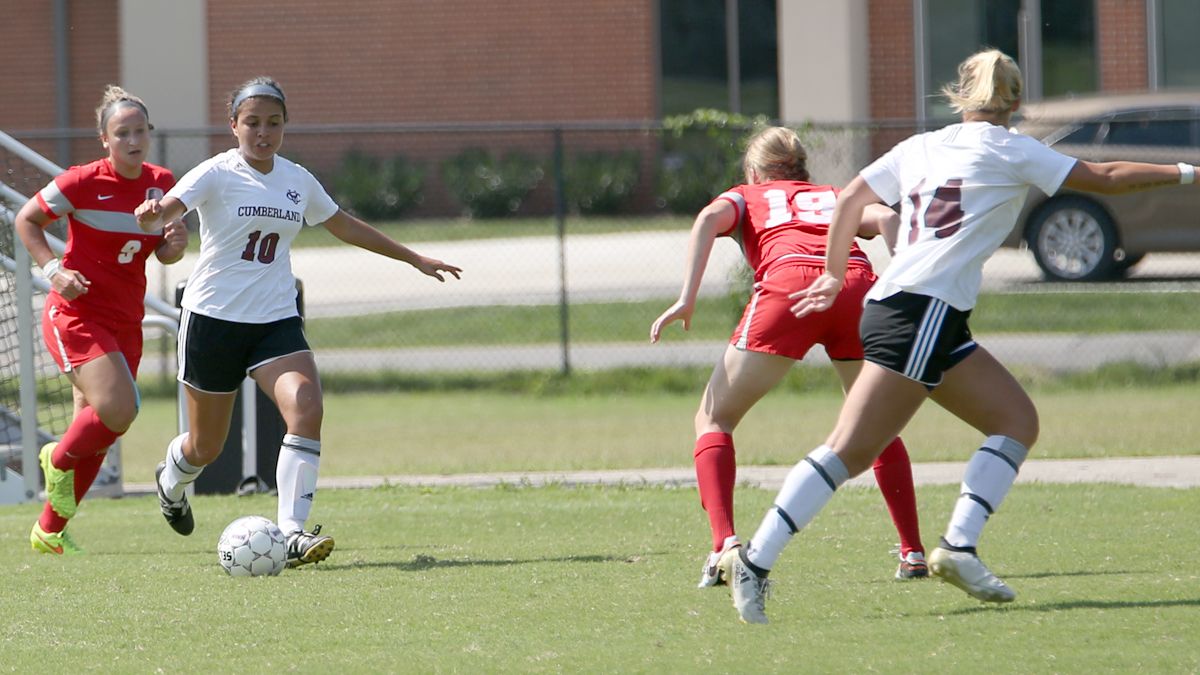 Marissa Avnaim passes to Emily Shires during CU's 3-3 draw Friday against Indiana Wesleyan. Avnaim scored her second goal of the year in the first half of the match. (Credit Bob Tamboli)
Indiana Wesleyan at #23 Cumberland Univ. | September 22, 2017

LEBANON, Tenn. – Marissa Avnaim netted her second goal of the year and Mariah Aplin put 23rd-ranked Cumberland ahead late, but Indiana Wesleyan scored with 2:07 left in regulation and neither team could find the back of the net in extra time in a 3-3 draw in women’s soccer action here Friday afternoon at Lindsey Donnell Stadium-Kirk Field.

Cumberland led 2-0 at the half thanks to Avnaim’s goal in the 23rd minute and an own goal in the 28th minute, but the Wildcats (7-0-1) struck quickly in the second period, with Olivia Schmidt posting her first goal of the year at the 55-minute mark to cut the lead in half.

Lexis Garcia knotted the match at two with a goal in the 65th minute, but Aplin’s score in the 83rd minute, her fifth of the year, seemed to give Cumberland a late victory. That was negated by the incredible speed of IWU’s Tia Sanford, who raced past three defenders on a long ball in the 88th minute, chipping it past Cumberland’s Ashley Kambeitz for the equalizer.

The Phoenix had the best scoring chances for most of the two overtime periods, with IWU goalkeeper Alex Seabeck collected two of her nine saves in the final 20 minutes, but it was a tremendous save by Kambeitz that saved the match for CU.

Sanford again outran defenders to a ball near the top of the box, but Kambeitz got there about the same time and blocked the shot late in the second OT. She finished with three saves and faced just eight shots but had little-to-no chance on any of the Wildcats three scores. Cumberland outshot IWU, 25-8, in the match, with 12 of those on frame.

Cumberland controlled the run of play for almost the entire first half and Avnaim took advantage of a scramble in front to put her team ahead, lofting a shot from near the penalty spot over the head of Seabeck in the 23rd minute.

Less than five minutes later Emily Shires crossed a ball from down the right sideline and it deflected off an Indiana Wesleyan defender into the net at the front post for a 2-0 CU advantage.

The second half was a completely different match from the Wildcats, who pressed and controlled the ball for the first 35 minutes. Garcia crossed to the front post for Schmidt, who beat a Cumberland defender and flicked it by Kambeitz, cutting the CU lead to 2-1.

Sanford then played a long pass toward the top of the box and Garcia cut in front of a Phoenix defender and chipped the ball past Kambeitz, shooting into an open net to even the match at two.

The home team regained the lead in the 83rd minute, with Savannah Moreland crossing to the middle. Avnaim back-heeled the ball and it bounced to the opposite side of the field, where Aplin gathered and fired far post, over the head of Seabeck for a 3-2 edge.

The lead last a little more than five minutes until Sanford showed off her incredible speed, taking a long pass from Schmidt and sending it past a charging Kambeitz for the equalizer.

Cumberland begins Mid-South Conference play on Tuesday, hosting the University of the Cumberlands at 1 p.m.