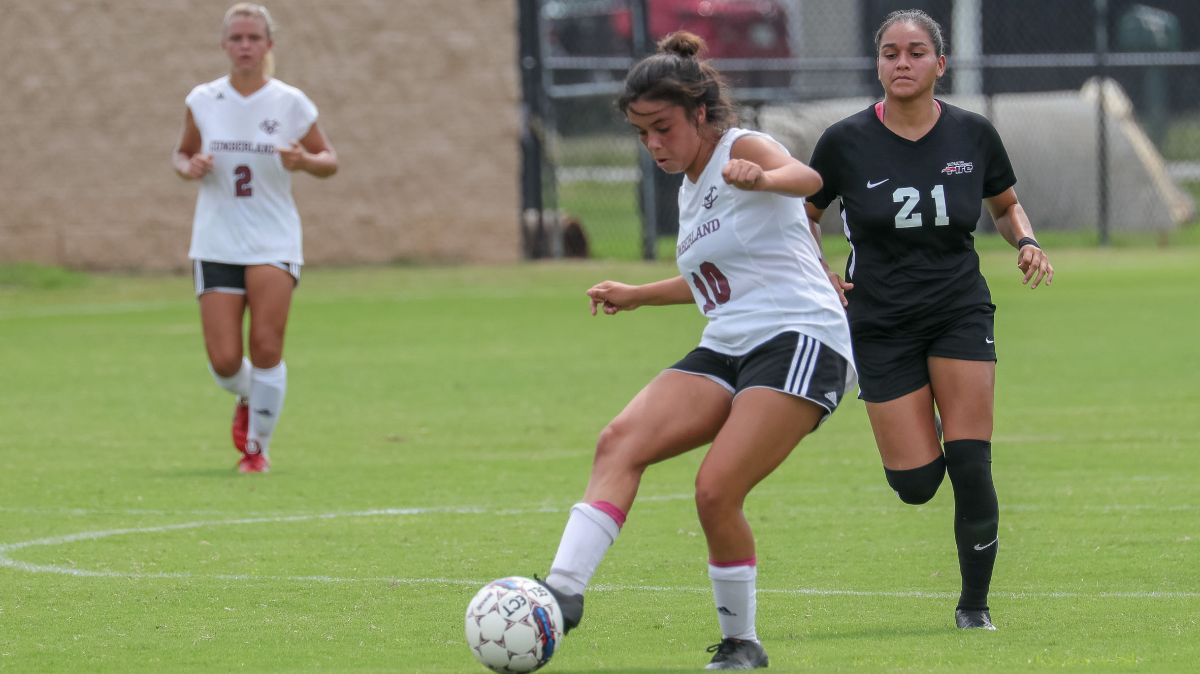 Jennifer Segura scored once in the first half and twice more in the second in CU's 5-0 win Monday at Brescia. (Credit Steve Wampler)
#9 Cumberland Univ. at Brescia University | September 17, 2018

Segura scored late in the first half and twice more in the first 20 minutes of the second period, helping the Phoenix (8-0-0) overcome a slow start and remain undefeated.

Cumberland completely dominated possession in the first half, outshooting the Bearcats 27-0. Brescia (2-5-0) gained possession on its offensive end just twice in the half and only once within 20 yards of the CU goal.

Cumberland peppered Brescia goalkeeper Jordan Blemker but she was up to the challenge on many shots from distance. Blemker and Cumberland’s Rebecca Holloway collided on a high cross in the 20th minute, injuring the CU senior and knocking her out for the remainder of the first half.

The uneven field made keeping possession very difficult with a bouncing ball, so the Phoenix played more directly down the middle and to the flanks. Mariah Aplin nearly scored late in the half on a ball down the left side from Kenzi Vetter, but Blemker got to the ball just before Aplin’s shot, making one of her 11 saves in the period.

Sarah Haddock missed a chance in front of the net on a corner kick and Haley Stevens and Segura each had volley chances from 6-10 yards out, but both shots sailed high. Segura finally broke through for CU in the 42nd minute, playing a combination from herself to Emma Campbell and Copeland, who played it back to Segura for a shot from the right top of the 18-yard box.

The ball got past Blemker and bounced into the side net for a 1-0 Cumberland lead at intermission.

Stevens gathered the ball deep down the left side and her cross to the back post found Segura, who fired past Savannah Jackson to the far post in the 58th minute. Just 68 seconds later Aplin found Copeland near the top of the box on the left side. Copeland turned to the middle and her shot sailed just under the crossbar for a 3-0 lead.

Segura picked up a deflected pass and raced past three defenders in the 64th minute, beating Jackson low and right to extend the advantage. Brescia’s only good offensive possession of the game ended with a missed pass near midfield and Moreland got the loose ball.

She made a long run down the left side, cut back to the middle and beat Jackson just under the crossbar in the 76th minute for the final goal of the match.

Cumberland continues a two-match road swing this Friday with a 2 p.m. CT match at Indiana Wesleyan.