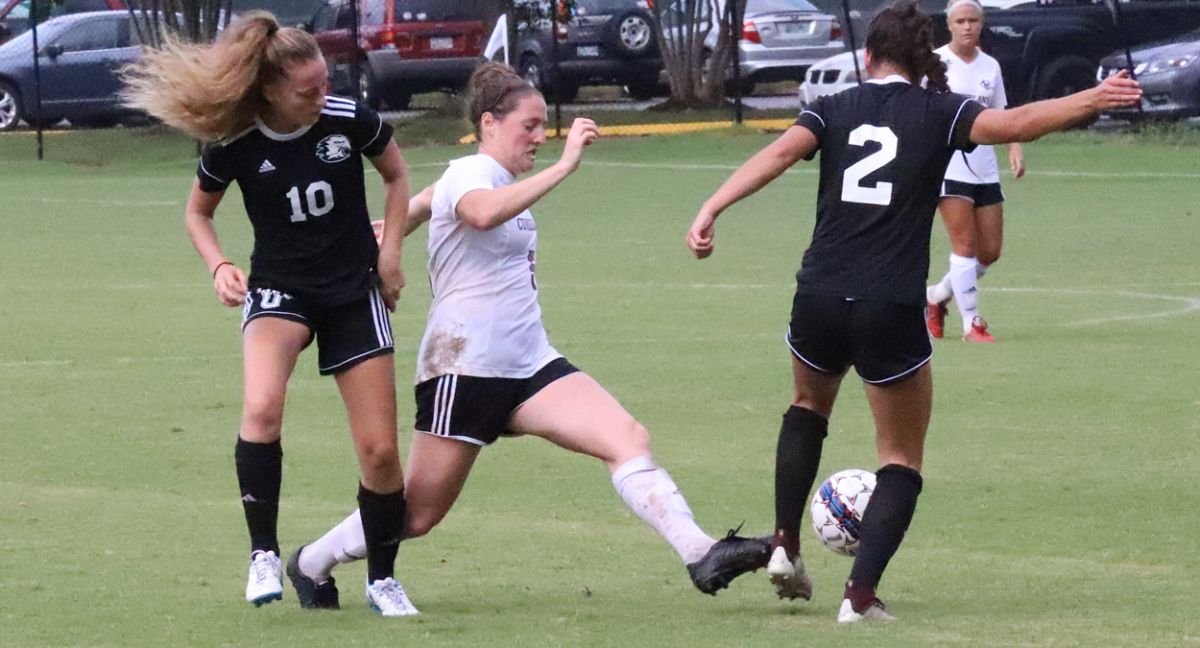 LEBANON, Tenn. – Kenzi Vetter scored early in the first half and Rebecca Holloway tallied a goal late in the period, as eighth-ranked Cumberland remained undefeated with a sloppy 2-0 victory here Monday over Life University in women’s soccer action at Lindsey Donnell Stadium-Kirk Field.

Significant rain fell during warm-ups and at the start of the match, making for a sloppy and wet field conditions, affecting both teams’ ability to pass and keep the ball, especially on the bench side of the field.

The Phoenix (10-0-0, 1-0-0 Mid-South) struck early, with Vetter taking a bad clearance near the top of the box all the way to the left. Her shot went off the hands of Life goalkeeper Julia Bernhardt into the top of the net for a 1-0 CU advantage in the ninth minute.

Cumberland peppered the net in the first half, but Bernhardt was up to the challenge in almost every instance, making diving saves on shots by Mariah Aplin and Savannah Moreland in the first 10 minutes as well as against Holloway and Copeland later in the period.

The Phoenix posted 17 shots in the half and finally got a second goal in the 42nd minute. Jennifer Segura tracked down a ball near the endline going away from the goal. She passed to Aplin, who quickly found Holloway near the top of the six-yard box. Holloway’s shot also ended up just under the crossbar, her 14th of the season, for a 2-0 CU lead at intermission.

Cumberland pressed in the first 10 minutes of the second half for a third goal, but Life took control of possession and the run of play in the middle of the period, making runs down both sides, drawing three corner kicks. The Running Eagles (4-5-0, 0-1-0) did not convert those chances but still managed 14 shots in the match, mostly from distance.

The Phoenix missed a couple of good scoring chances late in the match, with Emma Campbell’s shot from the right side sailing high and one by Moreland drilling the crossbar.

Cumberland goalkeeper Ashley Kambeitz made three saves in the match while Bernhardt finished with 15 against 30 total shots from CU.

The Phoenix host seventh-ranked Martin Methodist on Wednesday at 1 p.m. in the team’s final non-conference outing of the regular season.