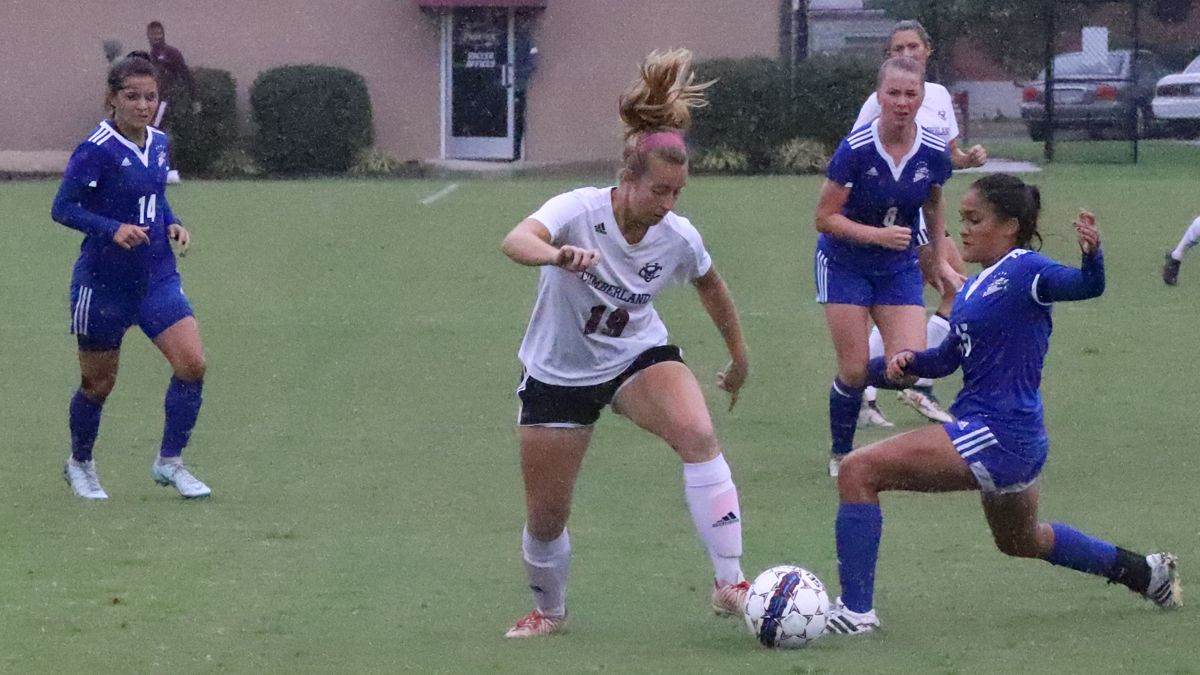 Autumn Copeland battles for a ball in the second half with Lindsey Wilson defenders in Sunday's 3-0 loss. (Credit Coy Gill)
#14 Lindsey Wilson at #10 Cumberland Univ. | October 14, 2018

LEBANON, Tenn. – Kajsa Conradsen scored a goal in each half and 14th-ranked Lindsey Wilson took control early in posting a 3-0 victory over No. 10 Cumberland in women’s soccer action here Sunday at Lindsey Donnell Stadium-Kirk Field.

The Blue Raiders (6-2-2, 4-0-1) took an early lead with a goal in the 17th minute and Conradsen scored on a rebound in the 30th minute, as Lindsey Wilson dominated the run of play for most of the first half. Conradsen finished the scoring with a header off a corner kick early in the second half and LWC posted its third consecutive shutout in the victory.

Cumberland finally gained possession in the attacking third in the final five minutes of the opening half, with a header by Autumn Copeland off a cross from Mariah Aplin sailing just over the crossbar. With just over a minute left in the period Jennifer Segura’s shot from the left corner of the 18-yard box also flew just over the crossbar and LWC took a 2-0 advantage to intermission.

The best scoring chance of the second half for the Phoenix was a 1-v-1 opportunity for Savannah Moreland midway through the period, but her shot missed the outside of the left post.

The Blue Raiders held possession for much of the first half and challenged CU goalkeeper Ashley Kambeitz early, including a header by Conradsen off a corner kick that was saved in the 12th minute and Sanna Svensson’s shot that Kambeitz made a diving save on in the 16th minute.

Lindsey Wilson got on the board first when Sina Cavelti took a pass near the endline and crossed to the penalty spot. Veronica Kurtz was waiting for a left-footed one-timer that was on top of Kambeitz quickly, beating the keeper low and just inside the left post for a 1-0 LWC advantage in the 17th minute.

In the 30th minute Delfina Santellan struck a free kick from 30 yards into traffic in front of the goal. Kambeitz made the initial save but Conradsen was there to pick up the rebound into an empty net, extending the Blue Raiders lead to 2-0.

In the 55th minute Conradsen struck out, heading in a corner at the far post from Amara Safuan. The ball went off a Cumberland defender at the front post and bounced in for the final goal of the match.

The Blue Raiders held a 14-10 advantage in shots in the match and forced Kambeitz into six saves.

Cumberland concludes the home schedule this coming week, hosting the University of Pikeville on Friday at Noon and Shawnee State on Sunday, also at Noon.