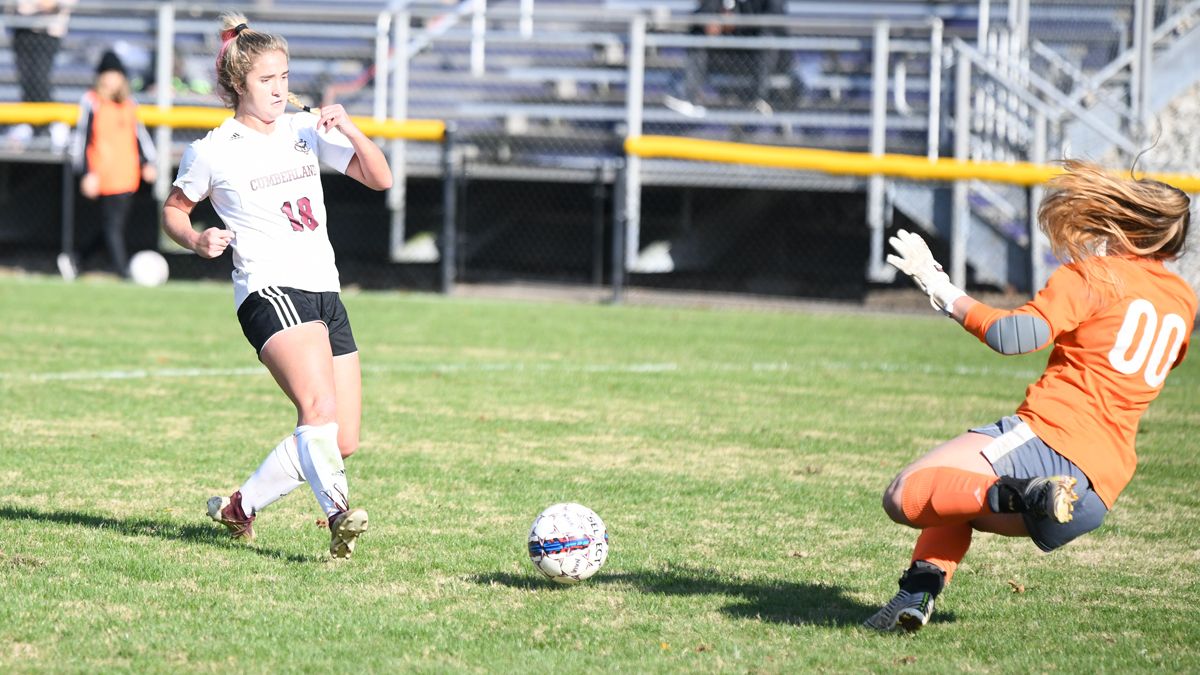 Haley Stevens shoots past the Georgetown keeper for a goal in CU's 2-0 win Thursday in the Mid-South Championships. (Credit Anthony Latessa)
Georgetown (Ky.) at Cumberland (Tenn.) | 0,

LEBANON, Tenn. – Haley Stevens posted a goal and an assist and Mariah Aplin scored just before the half for 14th-ranked Cumberland in a 2-0 victory over Georgetown College in the semifinals of the Mid-South Conference Women’s Soccer Championships on Thursday in Bowling Green, Ky.

The Phoenix (16-2-1) advance to the tournament championship match Friday at 4 p.m. against 10th-ranked Lindsey Wilson.

Aplin put home a rebound off a blocked shot by Stevens late in the 43rd minute, getting the Phoenix on the board after CU dominated the first half, outshooting the Tigers, 13-0. It was the fifth goal of the year for the Cumberland senior.

Georgetown goalkeeper Megan Martin made four saves in the period but the Phoenix got the late goal for the halftime lead.

The Tigers (6-11-1) near squared the match in the 66th minute when Skye Zimmer hit the post. Zimmer’s attempt a little more than 40 seconds later was saved by CU goalkeeper Ashley Kambeitz for her only save of the match.

Stevens gave Cumberland an insurance goal just three minutes later, taking a thru ball from Rebecca Holloway and slotting her shot past a charging Martin in the 68th minute. It was the eighth goal of the season for the CU freshman.

The defensive-minded Tigers pressed forward over the final 20 minutes, taking six shots in the period. Cumberland finished with a 24-6 advantage for the match in shots.