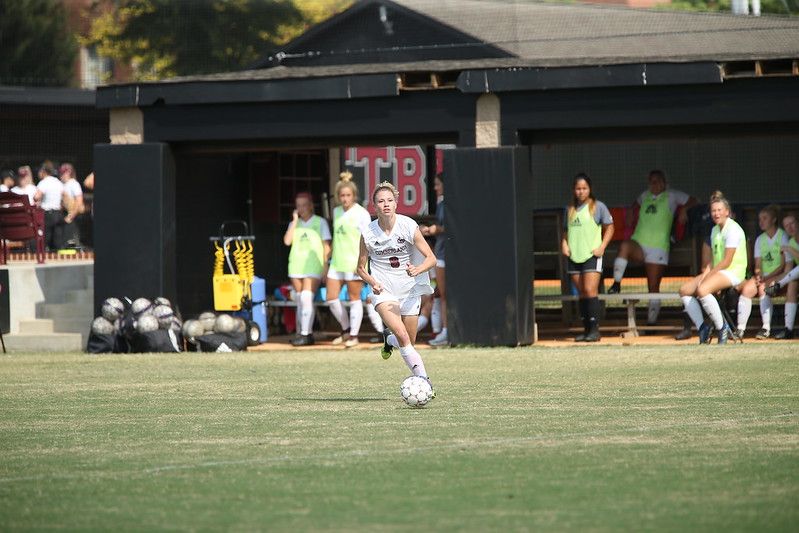 Carla Hager scored two goals and one assist for the Phoenix in the 3-0 victory over the Tigers. (Credit: Bob Tamboli)
Georgetown College at #21 Cumberland | October 05, 2019

LEBANON, Tenn.- A pair of goals from Carla Hager and a single goal from Danisha Brown seal the victory for the Phoenix.

Cumberland’s Carla Hager recorded two goals on the match and an assist on Danisha Brown’s late insurance goal. Haley Stevens assisted both of Hager’s goals while Cumberland keeper Sabrina Graziano collected one save and her first shutout in her first career start.

The beginning of the first half for Cumberland was explosive as Carla Hager was able to put the Phoenix ahead by scoring a goal off an assist by Haley Stephens at the 9th minute, putting the Phoenix ahead 1-0. After a few missed contested shots by Hager and Michele Scholz, Hager was able to connect for another goal in the 34th minute off another assisted pass by Stephens, making the score at the end of the first half 2-0 Phoenix lead.

The start of the second half was mostly controlled by Cumberland, as the Phoenix were able to hold the Tigers to only four shots, with none being on goal. As time was winding down, Cumberland’s Danisha Brown was able to seal the victory for the Phoenix by scoring a goal off an assist by Hager in the 89th minute. The Phoenix came out with the victory with a score of 3-0. Making the Phoenix 2-0 in the conference.

The Phoenix continue conference play at home, as they face the University of Pikeville on Tuesday, October 8th at 1 PM.