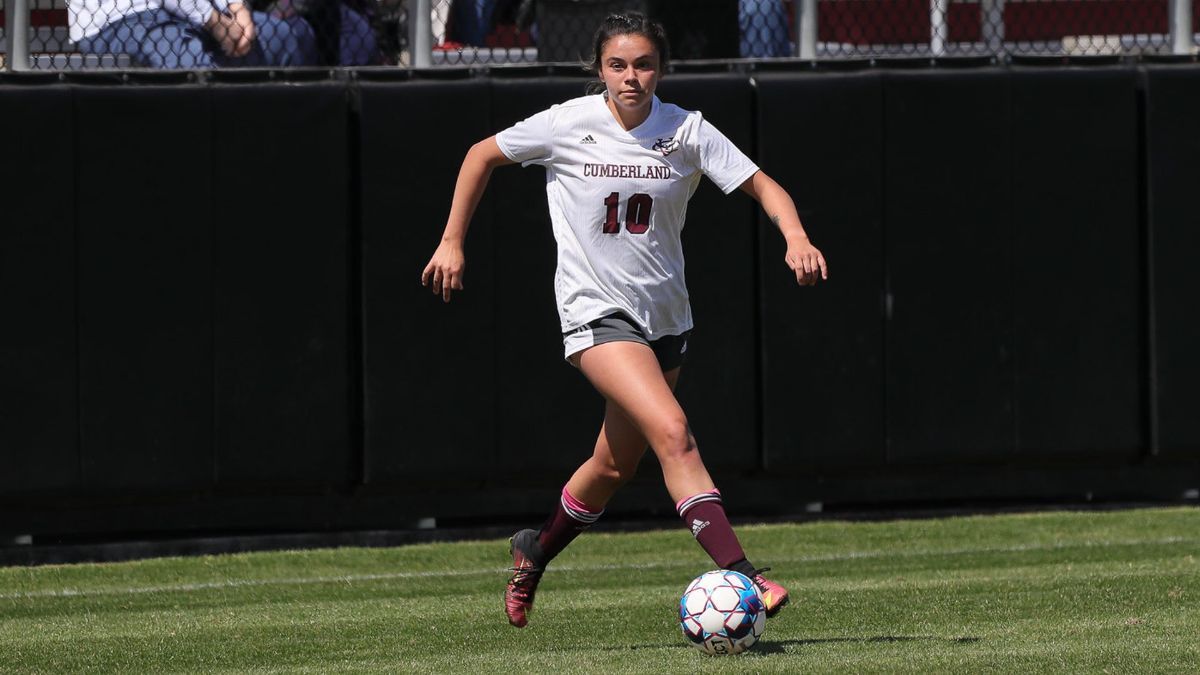 Jennifer Segura scored her fourth game-winning goal of the season to move on to the Opening Round Finals. (Credit: Steve Wampler)
Truett McConnell (Ga.) at Cumberland (Tenn.) | 0,

HATTIESBURG, Miss.--Cumberland controlled the pace of the match from the opening kick-off scoring two first-half goals and hanging on to a 2-0 win over Truett McConnell to advance to the NAIA Women's Soccer Opening Round Championship.

The Phoenix (10-3-0) dominated the ball possession taking 17 shots in the match with eight on frame. Brenda Cernas led the way in shots and shots on goal. Segura secured the game-winner early and Marie Bathe scored her fourth goal of the season.

Cumberland scored first as Cernas found Segura for a goal in the 16th minute to put Cumberland up quick in the match. The goal was Segura's sixth goal of the season.

Three minutes later, Truett McConnell tried to clear a ball that wound up at the feet of Bathe who fired a shot past Bears keeper Addy Galason and a Phoenix 2-0 lead after 20 minutes. Bathe's first goal since the first match of the season when she recorded a hat-trick.

The Bears had a chance on a counter-attack late in the first half, but AK Navas fired a shot from well outside the box as Savanna Stubbs picked up the only save she had to record in the first 45 minutes.

Truett McConnell had a great opportunity in the 49th minute as the Bears sent a corner kick into the box and Brianna Hernandez took a shot that Sarah Haddock sved in the goal and cleared away.

Cumberland had another opportunity to extend the lead on a Phoenix counter after a Bears corner kick. Bathe and Macy Douglas had a two-on-one opportunity and Bathe laid in a great pass to Douglas in the box by the near post and Douglas just missed the frame hitting the side of the net.

Moments later, Cumberland had another chance as Cernas put a great through ball at the top of the box to Kenzi Vetter and Vetter took a shot that went just over the crossbar.

The Phoenix had two chances on the same possession as Cernas dropped in a nice pass to Segura and Galason made a nice save, but the rebound found Cernas at the tip of the box who fired it just above the crossbar.

The Bears had one final opportunity with 10 minutes remaining and Stubbs was able to meet the pressure at the top of the key and Haddock cleared it away and Cumberland fought off the final push from Truett McConnell.

The Phoenix fired off three shots in the final three minutes, but could not put in another goal.

Cumberland recorded their ninth shut out of the season. Keeper Savanna Stubbs posted three saves on the match.

The win is the Phoenix women's soccer program moves to 6-0 in the first game of the opening round and advance to the Opening Round Championship to play the winner of No. 1 William Carey and No. 4 LSU-Shreveport.