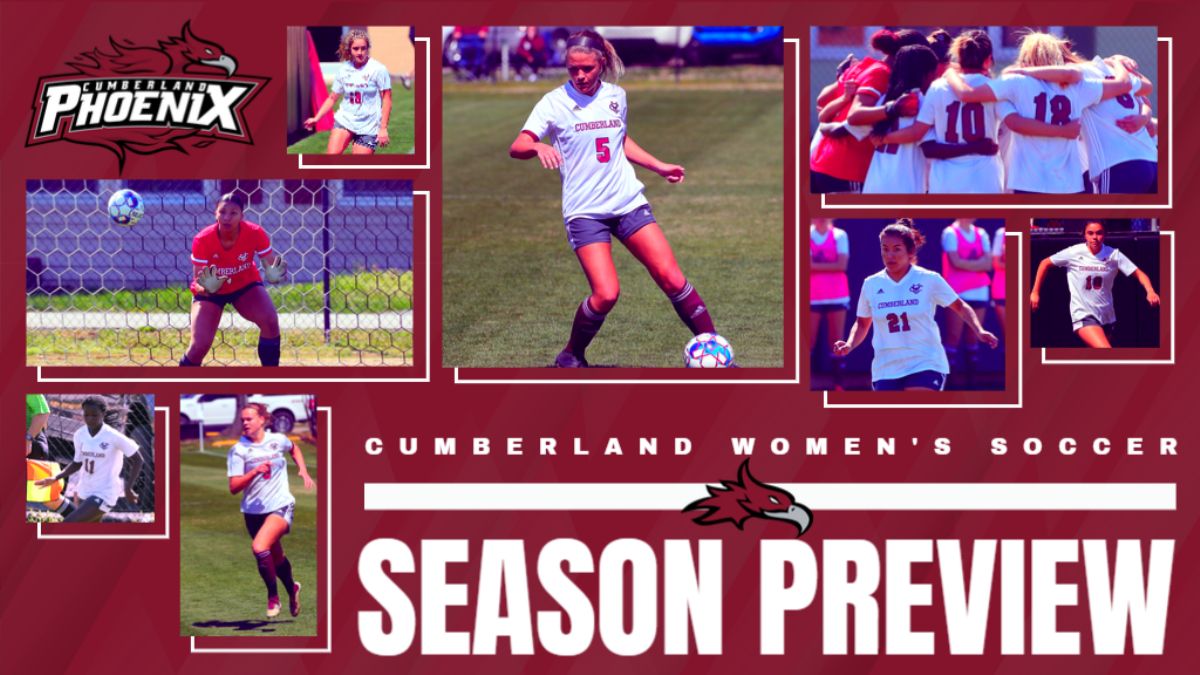 LEBANON, Tenn.--The 2021 Cumberland University women's soccer team looks to build off their sixth trip to the NAIA National Tournament through a seasoned group of players and talented newcomers.

The preseason No. 20 team in the country returns nine starters from last season's 10-4 team. Cumberland made it to the Opening Round Championship match of the national tournament before they were knocked out by national champion runner-up William Carey.

Head coach Scott Davidson is happy that the team was able to start where they finished last season ranked No. 20, but at the same time has expectations to take the next step this season. "It always feels good anytime you're in the Top-25, but at the same time, we have goals and aspirations to be higher than that. So we'll use that as motivation."

The team is coming off a shortened off-season where soccer was pushed back to the spring, but that has not slowed the team down any in their preparation. "The girls did a good job on coming in with good base fitness. So we were able to hit the ground running and get into what we want to play tactically and really focus on some smaller details rather than trying to build that base fitness up right from the beginning," he said.

Last season's team had one of the most tenacious defenses in the NAIA ranking in the Top-10 in shutouts with nine. The Phoenix prided themselves on fundamentally sound defense and made strong pushes for goals when they needed to.

"The expectation there is we're going to be defensively sound again. We definitely want to be a little bit more creative and take more chances going forward.  We were able to basically win a lot of games by one or two goals. This year, we definitely want to score more goals and we've definitely brought in the firepower and players to compete to do that, but at the same time we're still not going to concede goals," Davidson said.

Cumberland's roster is chock-full of high-level returners that have been to the National Tournament, played in high-level games, and Davidson thinks this group can bring Cumberland back to where they have been in the past and beyond.

"The returners have been fantastic servants for the program. Anything that we've ever asked of them they don't complain, they don't think twice about it, don't question anything. They are fully bought into what we are trying to do, and how we're trying to do things. They're massively important on and off the field and in teaching the new players who we are, how we do things, how we practice, the behaviors that we want on and off the field. I expect all of them to be key players and have big impacts a season," he said.

Cumberland is returning five All-Mid-South Conference players and one former NAIA All-American, Marie Bathe. Bathe posted eight assists and three goals in the shortened season last spring and nine goals and 16 assists in her freshman campaign. She is expected to drop back from her traditional forward position to play more of an attacking midfielder role.

CU returns leading goal scorer from last year Jennifer Segura. She enters her fifth season at Cumberland taking advantage of the extra year the NAIA granted the student-athletes. Segura has played in 70 career games and has scored 17 career goals including six game-winners. She is a three-time All-Mid-South Conference Award winner.

Also returning is senior Haley Stevens. She scored two goals and posted three assists in 13 contests last season. She was named a Second Team All-Mid-South Conference player in 2018 and has also win Mid-South Conference Offensive Player of the Week one time. Stevens has played in over 50 games entering this season.

Brenda Cernas is back for her third season after earning All-Mid-South Conference Honorable Mention in the spring. Cernas has played in 32 career games scoring six goals with nine assists. Macy Douglas and Gabby Jones return as strong points for the forwards this season.  Douglas, a Lipscomb Univ. transfer at the break last season, played in 11 games last year scoring two goals. Jones scored one goal in her freshman campaign last season.

On the backline, Cumberland brings back Second Team All-Conference performer in Becca Campell. Campbell starts her second season after coming to Cumberland from Edmonton, Alberta. She played a pivotal role in Cumberland's defensive efforts at center back. Monica Mullaney also starts her second season at Cumberland after transferring at the break last year from Lipscomb. The junior played a strong left-back for the team last year and is expected to continue in that role.

Cumberland brings back two goalkeepers that the staff feels is fully capable of helping Cumberland win. Sabrina Graziano is entering her third season at Cumberland and after battling with injuries is competing for the starting spot. Savanna Stubbs returns for her second season and was the starter for all of last season conceding 10 goals in 14 games played while making 35 saves.

"We couldn't be happier with what we have brought in, nobody's let us down in any way and everybody's at the level we expect them to be."

"Cassie McKinney is coming down from Tennessee Tech, Julia Kaset from Lee University, and Kayla Travis from Montevallo. They've all been very good players for us and bring a lot of experience coming from all good programs, so we're excited to see what they can do and excited to push the freshmen and see where they can go," Davidson said.

As for the incoming freshman, Davidson and his staff are excited about how they have come in and settled into the program. Grace Morris, Ella Tuplin, Brenna Swiger, and Ameryn Hudgens are each entering their first season at Cumberland and Davidson expects them to not only help the team now, but excel in the future.

Cumberland was set to open the season on Tuesday, but the game was postponed due to COVID. Cumberland will open the year on Saturday against Thomas University for their first action of the season before getting into the brunt of the schedule.

"Obviously, we've got a very strong conference. We've got four Top-25 teams later on in the season. At the same time, we're playing some local games, against local teams, and they're not going to be easy games," he said.

"We're ready for good competition, we play Aquinas, which is Top-15, the fourth game in the season. So that'll be a fantastic test. But now, we're just looking forward to it, basically getting going again, having a regular season."

Davidson and the Phoenix are prepared for the start of the season and the sky is the limit with this team. Coach Davidson closed by saying, "It just comes down to everybody pushing each other for starting positions and for minutes to make everyone better. We are not going to concede goals, but we want players that are going to be brave and consistently go forward and take chances and score goals. So that's the kind of push that we're making this year and I think we fully feel they're capable of doing."