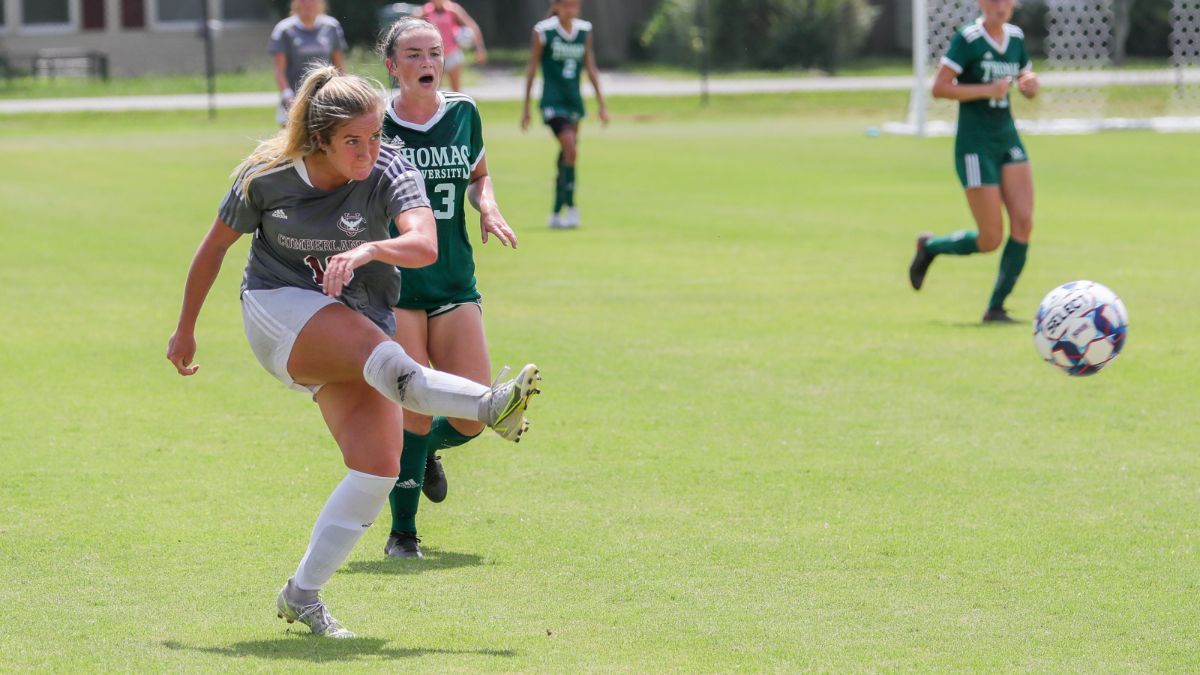 Haley Stevens made a long goal in the 68th minute to cut into the lead. (Credit: Steve Wampler)
Aquinas at Cumberland | September 05, 2021

LEBANON, Tenn.--No. 15 Aquinas scored two early goals as No. 20 Cumberland could not push in the equalizer in the closing moments in women's soccer action on Sunday at Lindsey Donnell Stadium at Kirk Field.

Cumberland pressed the tempo in the second half looking to cut a 2-0 lead firing 14 second-half shots. Forward Haley Stevens was able to cut the lead in half with a deep shot that went over the outstretched arms of Aquinas goalkeeper Tairyn Webb in the 68th minute.

Jennifer Segura had an opportunity to net a goal with just the keeper to beat, but Webb crashed on the ball and didn't allow Segura to take a shot. In the final seconds of the match, Kenzi Vetter came up with a loose ball just outside the box. Her shot just went over the crossbar and the Saints milked the final 20 seconds of the match to get the win.

In the 2nd minute of the match, Aquinas' Avery Tack made a throw-in to Hannah Crum and Crum was able to beat Graziano on the near post for a quick Saints lead.

10 minutes later, Cumberland was called for a foul just outside of the box giving the Saints a free kick. Ariana Garcia took the free-kick and put it in the upper corner for the second goal of the match.

Kayla Travis had a chance to put Cumberland on the board off a pass from Brenda Cernas, but her shot ricocheted off the crossbar.

Cumberland did not have many more opportunities in the first half as the Saints backline played extremely well all match and did not allow many easy shots.

The Phoenix pressed the tempo in the second half and were able to put more shots on target, but Webb was there for them making nine saves in the match.

Stevens' long ball from 30-yards out was the only shot that Cumberland could scratch by as the Saints did not concede any easy goals.

CU made a push in the final minutes, but Vetter's shot that just missed high was the closest that Cumberland could get to the equalizer.

Cumberland keeper Sabrina Graziano allowed two early goals but settled in to play extremely well in the second half. Graziano made a nice diving save late in the match and prevented a cross to a wide-open Macy Hollingsworth. She made six saves in the match.

Aquinas and Cumberland each posted 12 and 13 fouls, respectively. The Saints took one more corner kick than Cumberland, 5-4.

The Phoenix will go on the road for the first time on September 9 to take on Brewton Parker before returning home for a contest with South Carolina-Beaufort on Sunday, September 12.