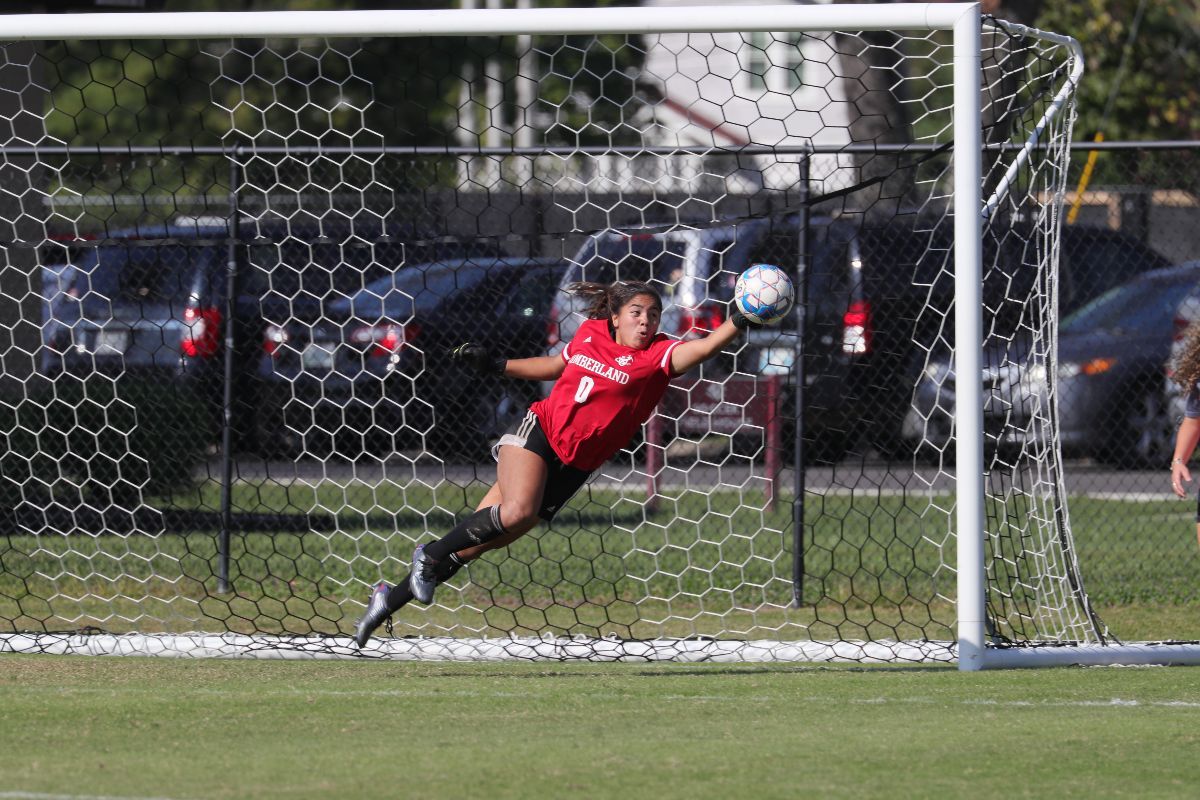 Sabrina Graziano making a save in the match against No. 11 Lindsey Wilson. (Credit: Steve Wampler)
Lindsey Wilson at Cumberland | October 24, 2021

LEBANON, Tenn.-- No. 11 Lindsey Wilson scored four goals in the second half to defeat No. 18 Cumberland 4-1 in their final home regular-season match.

Cumberland (11-3-1, 7-2-1 MSC) have now dropped back-to-back matches with today's loss. Cumberland posted 20 shots on the match with 10 on goal. Keeper Sabrina Graziano made five saves in the match. Jennifer Segura scored the Phoenix's lone goal in the first half.

The Blue Raiders had a great opportunity to be on the scoreboard first in the 13th minute. Cumberland committed a foul outside of the box and Alicia Thoresen took the shot off the free-kick. She places it in the upper left corner of the net, but Graziano made an incredible diving save to keep it at 0-0.

The Phoenix struck first on a counter-attack as Kayla Travis played a great ball outside of the box to Ella Tuplin. Tuplin followed that with a great cross in the box to Segura for the header and a 1-0 lead.

Out of halftime, Brenda Cernas fired a shot that Lindsey Wilson keeper Maya Caon made a nice save to tip it over the crossbar and keep the deficit at 1-0 for the Blue Raiders.

Lindsey Wilson scored the equalizer in the 53rd minute. Rayssa Neres Gomes De Souza found the back of the net assisted by Alicia Thoresen and Yudaya Nakayenze.

Segura had a chance to give the Phoenix the lead again in the 63rd minute. Cernas blocked a pass and took it the other direction for a one-on-one opportunity. Cernas ended up having her shot blocked, but the ball ricocheted to Segura at the top of the box and she fired a shot that Caon gained punched it over the crossbar to keep the match tied.

Moments later, CU committed a foul outside of the box Rayssa Neres Gomes De Souza scored her second goal of the match on a free-kick.

Just after that goal, Lindsey Wilson added to the lead with a goal from Britt Tonis on a corner kick. Tonis hit the corner off the back-post and into the net for a 3-1 lead with 22 minutes to play.

Lindsey Wilson added one more goal with a penalty kick by Yudaya Nakayenze in the 85th minute to win 4-1.

Cumberland will close out the regular-season against No. 3 Tennessee Southern next Thursday.