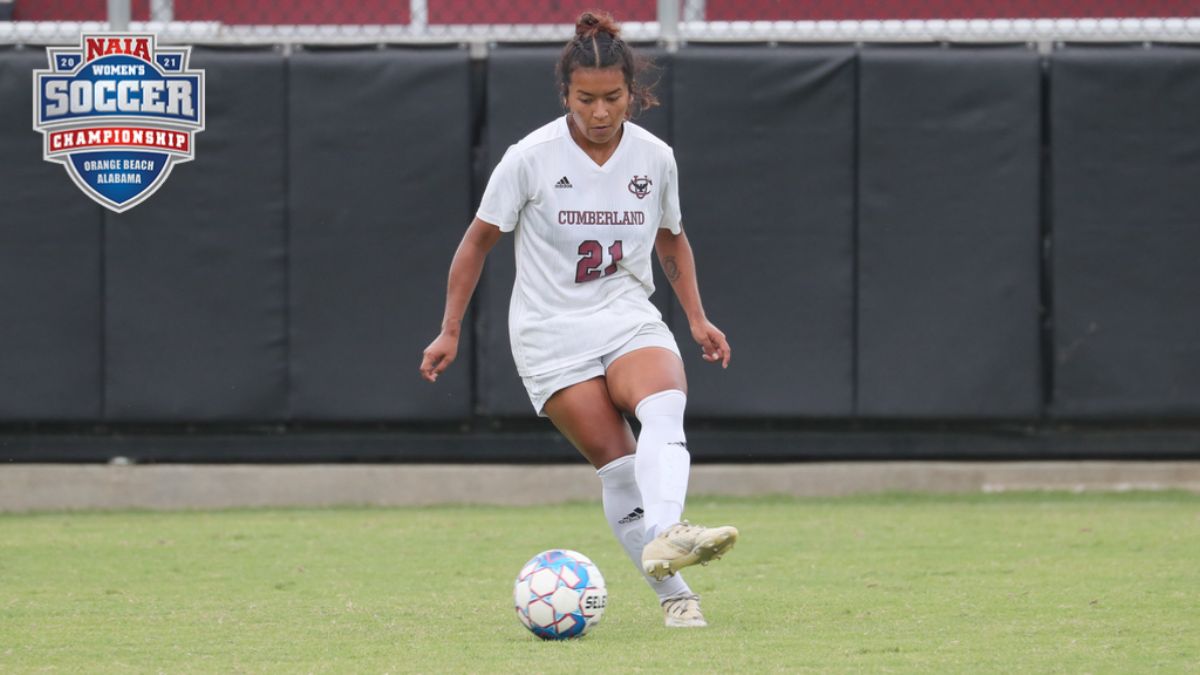 Brenda Cernas had a big day offensively with a goal and an assist in the match (Credit:Steve Wampler).
St. Thomas at Cumberland | November 18, 2021

WEST PALM BEACH, Fla.-- Cumberland tops St. Thomas 2-1 in the first match of the opening round of the NAIA Women's Soccer National Tournament. Brenda Cernas led the Phoenix in scoring with a goal and an assist on the day.

Cumberland opened the match with a strong first half, including a goal to take a lead early in the first. Brenda Cernas put away her eighth goal of the season on a beautiful shot in the eighth minute to give the Phoenix a 1-0 advantage. Haley Stevens and Jennifer Segura registered the assists on the play after Stevens made an excellent play gathering the ball and passing it up the middle to Cernas.

For the first 20 minutes of the match, it was all Cumberland as they controlled the possession for most of the period and put pressure on St. Thomas. The Bobcats had a slow start but finished the first half with some momentum.

St. Thomas had an excellent chance to score after a pass to the middle left Jocelyn Mendez with a wide-open shot on goal. Sabrina Graziano thwarted that shot attempt with one of the best saves of the year as she leaped into the air and made a spectacular play on the ball with one hand to knock it away.

The first half ended with Cumberland registering three shots with all three on goal compared to St. Thomas's five total shots and four shots on goal. CU went into the half with the 1-0 advantage.

Cumberland had a few opportunities to add to their lead to begin the second half. Brenda Cernas and Haley Stevens both had open shots on goal that they could not put away within the first seven minutes of the second.

The Phoenix expanded on their lead in the 74th minute on a shot from Macy Douglas that found the back of the goal despite a desperation save attempt from Bobcats keeper Melanie Lefebvre. Emma Lucas found Brenda Cernas off a throw-in, and Cernas completed a cross to Douglas on the right side to give Cumberland the 2-0 lead.

The Bobcats scored a late goal by Andrea Manzur in the match with two seconds to play to break up the shutout, but the Phoenix held on to win the match 2-1.

Cumberland recorded ten shots in the match, with six on goal, while the Bobcats took 15 shots with nine on goal. Sabrina Graziano had an excellent game, recording eight saves, including a few acrobatic saves that kept the Phoenix ahead. Leading the way offensively for the Phoenix was Brenda Cernas, who recorded three shots, one goal, and an assist on the day.

The victory marks three straight seasons of Cumberland recording at least one win in the NAIA Women's Soccer National Tournament.

With the win, Cumberland moves on to the NAIA Opening Round Championship against the No. 11 seed in the West Palm Beach Bracket Keiser University.