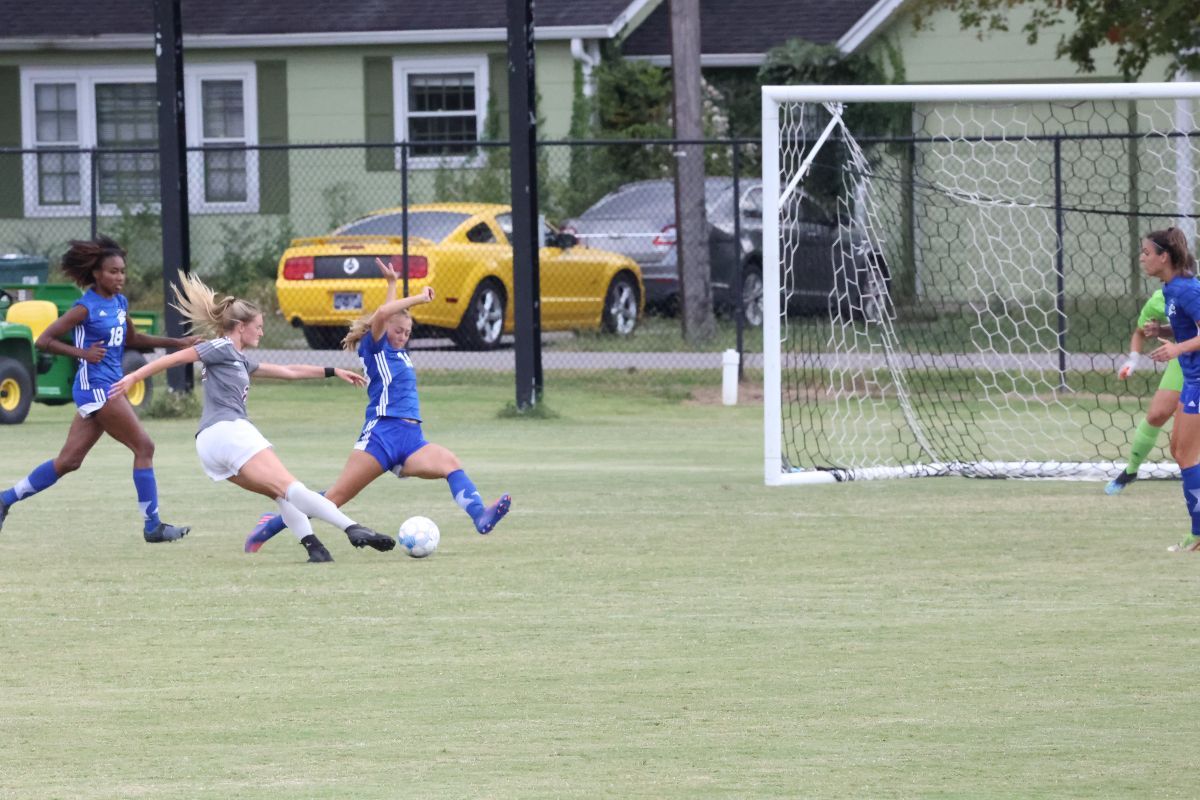 Lebanon, Tenn.-- No. 13 Cumberland drops in an intense, physical battle against No. 22 Lindsey Wilson College.

The Blue Raiders were led by Rayssa De Souza, who scored three of their four goals. Marie Bathe recorded two important goals to tie up the game twice for the Phoenix. Macy Douglas registered a goal of her own in the effort.

Cumberland took 16 total shots, just one more than the Blue Raider’s 15. Each team was dealt two yellow cards in the match with 23 total fouls divided among the two of them, proving just how physical the game was from start to finish.

Lindsey Wilson took an early lead in the first minute of play when Emma Lindell set up Rayssa De Souza for a one-on-one opportunity at goal. Cumberland quickly responded with a goal of their own when a breakaway from Macy Douglas ended with a foul in the Blue Raider box. Marie Bathe took the free kick for the Phoenix and secured Cumberland’s first goal of the game with a high-corner shot mishandled by Maya Coan in goal.

The Blue Raiders were quick to recover their lead  when Lindell crossed the ball within the Phoenix box and it ricocheted off of the foot of Moncia Mullaney into Cumberland’s goal. The Raiders expanded their lead to two goals in the 25th minute off of a free kick that De Souza headed into the Phoenix net, tallying her second goal in the affair. The Phoenix trailed by two at the half, with a score of 3-1.

Lindsey Wilson took the first two shots of the half, one of which was saved by Sabrina Graziano and the other going high over the crossbar. The Blue Raiders took a free kick in the 56th minute but could not find an opening in the Phoenix defense and Bathe was able to clear it away.

Bathe recorded her second goal of the game to close in on the Raider’s lead with a kick that slowly made its way into an empty Blue Raider goal. Sarah Haddock beautifully set up her teammate to make the shot with a long pass.

Less than a minute after Bathe’s goal, Macy Douglas tied up the game with a goal of her own, assisted by Bathe and Gabby Jones. Jones worked around her tight defender to set Douglas up with a one-on-one opportunity at the goal.

With twenty minutes left to play, a foul in the Phoenix box granted the Blue Raiders a free kick opportunity, which De Souza capitalized on to score her third goal of the game and reclaim the lead.

Evelyn Jimenez set Douglas up with another great opportunity to tie the game in the 83rd minute but Douglas just missed the goal wide on the left side.

Cumberland fought hard to post another goal and force a tie game, but Lindsey Wilson was able to hold on for the remainder of the match. The Blue Raiders took the game with a 4-3 score.

The Phoenix will be back on their home field this Wednesday at 1 pm to take on the Freed-Hardeman Lions.