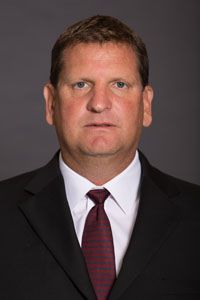 Davies career as a collegiate coach includes stops as head coach at Green Mountain College in Poultney, Vt., and Caldwell College in Caldwell, N.J. He was also an assistant coach at Eckerd College in St. Petersburg, Fla., and served as head coach at Southeast High School in Bradenton, Fla.

He has spent the last four years with the Murfreesboro Soccer Club in Murfreesboro, Tenn., serving as head coach of two Premier clubs, including a U15 girls squad ranked in the state of Tennessee. His duties included off-season training and personal training with the players.

Davies served as head coach at Green Mountain 2001-02, posting a 32-10 mark and earning Mayflower Conference and NSCAA/Adidas Region X Coach of the Year honors in 2001. The Eagles were ranked No. 1 in the region and ranked in the Top 20 nationally during both seasons, making an NAIA National Tournament appearance in 2001. He coached five All-Americans and two conference players of the year while at Green Mountain.

He then moved to Caldwell College for two seasons, registering an 18-19-2 mark, including 11-8-2 in 2004, the program’s first winning seasons. The Cougars tallied an 8-2 record in the Central Atlantic Collegiate Conference in his second season as well, the best CACC mark in school history, posted the first conference tournament win for the program before losing on penalty kicks in the semifinals, and received the first-ever bid to the ECAC Tournament for Caldwell. Davies coached five All-Conference players and the Newcomer of the Year during his tenure.

He served as an assistant coach at Eckerd College for five seasons, assisting with practice, game preparation and recruiting as well as off-season training and personal training.

Davies coached three seasons at Southeast High School, posting a 34-10-8 mark, including an 11-win improvement in his first campaign. The Seminoles won a district championship and reached the region semifinals in 2011.

He served as President and Director of Coaching at Soccer11 Advanced Training in Wall, N.J., for seven years during his time in the Northeast and also was an assistant coach at Green Mountain for four seasons.

Davies received his bachelor’s in Liberal Studies from Green Mountain in 1996. He earned First Team All-Mayflower Conference honors three seasons and was twice named All-American and NSCAA All-New England. He was inducted into the Green Mountain College Athletic Hall of Fame in 1996 and is the program’s all-time leading scorer.