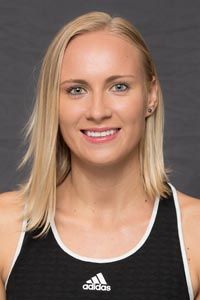 Ekaterina Kamendova begins her second season as a graduate assistant at Cumberland after completing her collegiate career at Embry-Riddle.

The Bulldogs suffered through and up-and-down campaign in 2014, playing most of the season with just four healthy players. Despite all of the struggles, the squad finished 9-8 overall, including victories over Belhaven University and No. 14 Coastal Georgia. Angelica Sepulveda and Antea DediÃÂ Ã¢ÂÂ¡ were both First Team All-Mid-South Conference selections and Alena GizdiÃÂ Ã¢ÂÂ¡ earned MSC Player of the Week honors twice.

Kamendova garnered First Team All-America accolades as a junior and the Eagles reached the semifinals of the NAIA National Tournament before falling to Auburn-Montgomery. ERAU made it to the finals of the national tournament during her senior campaign before running into AUM again.

She began her collegiate career at Washington State, compiling a 21-16 singles mark and a 19-16 doubles record for the Cougars in 2007-08. WSU reached the NCAA Tournament that season, falling to LSU in the first round. Kamendova earned Freshman of the Year and Strength and Conditioning honors at WSU and received the 2008 ITA Cissie Leary Award for Sportsmanship.

During her sophomore year she finished 13-16 in singles and 9-19 in doubles for the Cougars.

She held national rankings as a junior in Russia, reaching as high as No. 4 in 2003 and No. 15 in 2004 in 14U. Kamendova won two national tournaments while reaching the finals in three others.